After a run of consecutive record breaking weeks with rapidly increasing prices, the major assets have taken some much needed time to pull back and consolidate. DeFi continues to outperform.

The total cryptocurrency market capitalization decreased by -4% this past week, falling from $1.06T to $1.02T. It will be interesting to see how the market reacts to the $1T level going forward, whether or not it will act as a floor to consolidate around before eventually pushing higher. From a macro perspective, one can only assume that passing $1T will catch the eye of the traditional finance world, even further establishing crypto as an industry that’s here to stay. 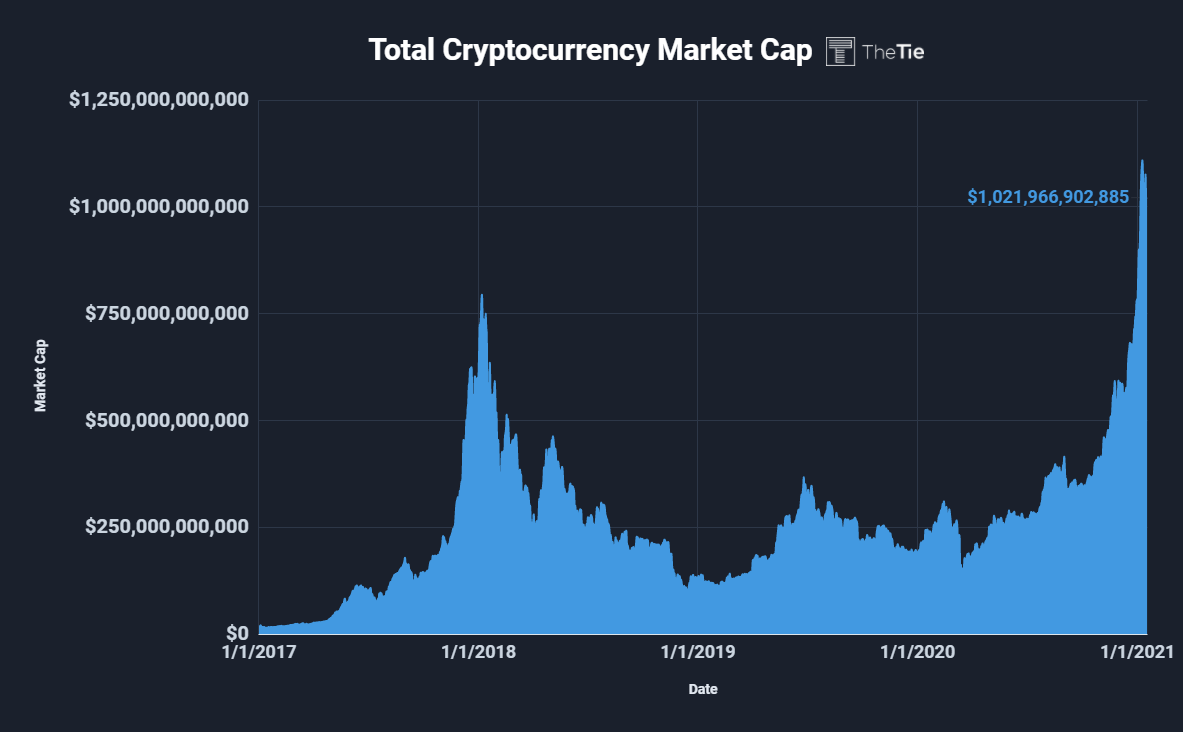 After a run of consecutive record breaking weeks with rapidly increasing prices, the market has taken some much needed time to pull back and consolidate. The median return of major assets was -1.1%, with BCH (-20.6%), LTC (-16.7%), and XRP (-12.8%) taking the biggest hits. On the flipside, the assets that did have positive returns saw huge gains: DOT (+82.3%), LINK (+43.3%), and ADA (+24.6%). Despite a mild correction throughout the market, investor sentiment remains positive as indicated by The TIE’s Long Term Sentiment Score. Every major cryptocurrency has a high score (above 60), with the median score being 74.3. Trading volume (-12.4%) and Tweet volume (-19.9%) were down over the past 7 days, with DOT and LINK being the only two majors to have an increase in volumes.

There were more media mentions of DeFi (348) than Ethereum (317) this past week. Polkadot had the biggest increase in mentions, with headlines focused around DOT surpassing XRP in market capitalization. Grayscale Investments caught the media’s attention after raising $700M+ in a single day, its largest daily asset raise ever. 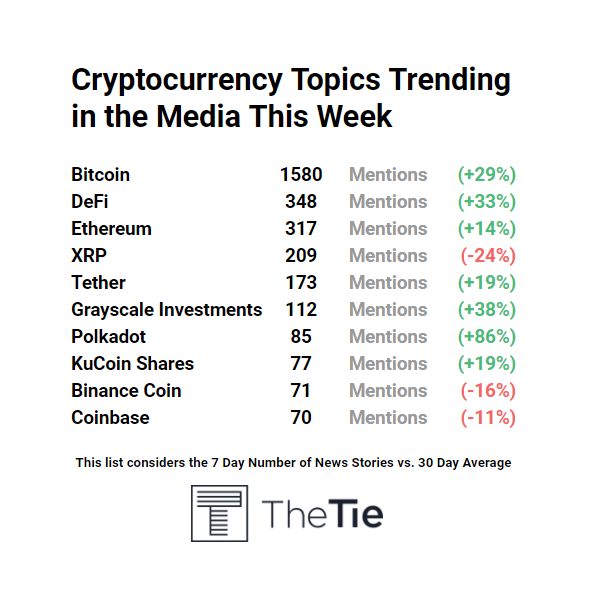 With the turn of the new year, it’s important to keep track of how each crypto sector is performing. Will new trends emerge or will some sectors continue to dominate? Using FTX’s Indices, let’s compare the YTD performance of each index as well as Bitcoin and Ethereum. So far in 2021, we’ve seen DeFi continue to lead the cryptocurrency market (+91.4%), followed by ETH (+67.6), and ALT (+54.7). Bitcoin has been the weakest performer so far, despite being up an impressive +23.3% since Jan 1st. 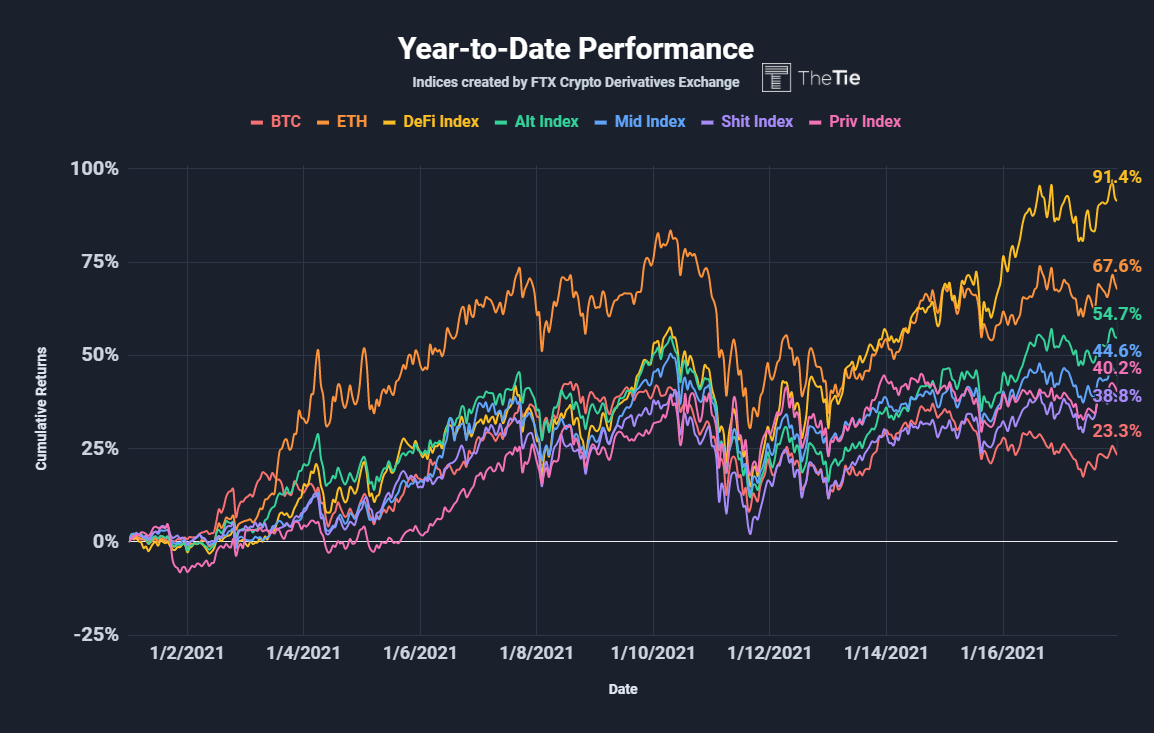 The price of Bitcoin traded within a 31.8% range, opening the week at $38,150 before quickly falling -20% to set the low of the week at $30,420 on Monday. This sell-off started shortly after the U.K’s financial regulator issued a very blunt warning about the rise and risks of BTC and other cryptocurrencies. The move was then exaggerated even more due to nearly $2.6B in liquidations occurring throughout the derivatives exchanges, wiping out high leveraged long positions that have been stacking up during the recent price rally. Binance ($988M) and ByBit ($463M) made up the majority of that total liquidation amount. Late Monday evening, the market turned around after some positive news kickstarted enough enthusiasm to stop the intense selling.

Bitcoin exchange Bakkt has announced a finalized business combination deal that will involve a merger with VPC Impact Acquisitions Holdings to become “Bakkt Holdings”. This will result in the Intercontinental Exchange subsidiary becoming a publicly traded company on the New York Stock Exchange with an expected valuation of $2.1B.

A pair of Kentucky lawmakers have submitted a bill this past week that aims to make the U.S. state a more attractive location for cryptocurrency miners. State Representatives Steven Rudy and Chris Freeland have proposed a 13 page bill with the goal of providing “sales and use tax exemptions on the tangible personal property directly used and the electricity used in commercial mining of cryptocurrency as of the date of approved application” with additional incentives focused on energy use. 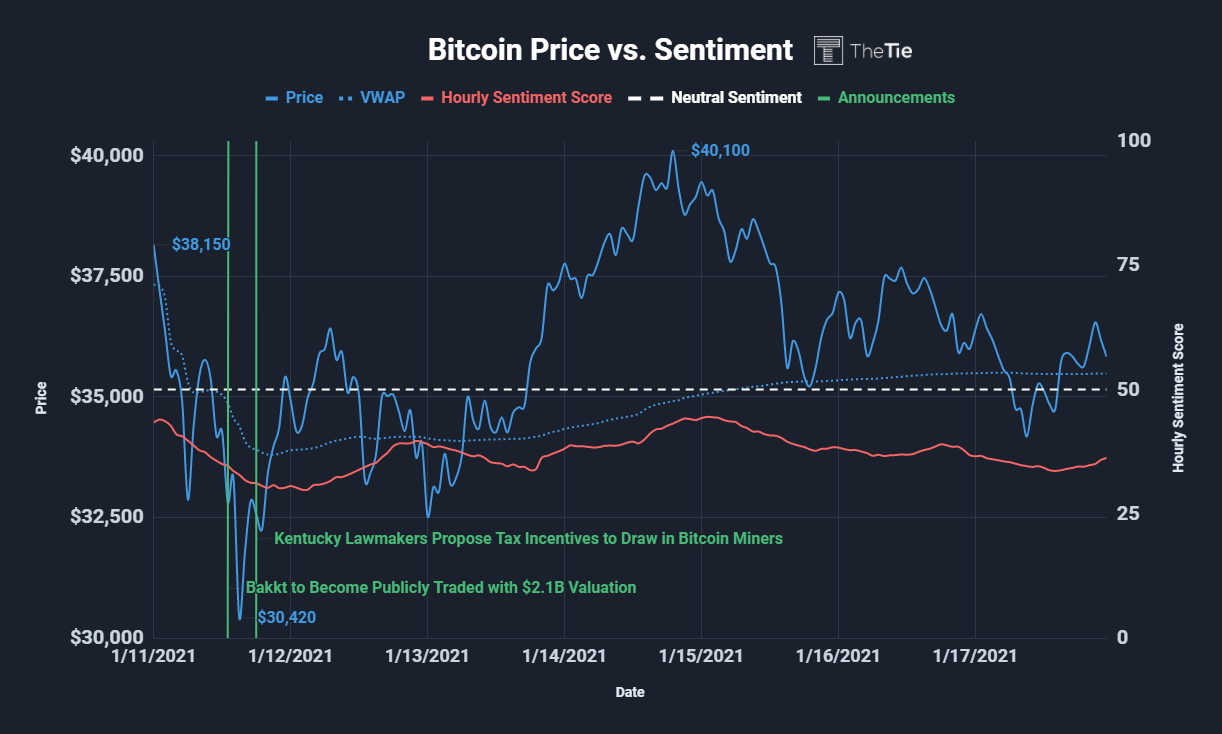 Following these announcements, the price of BTC climbed +31.8% to set the high of the week at $40,100 on Thursday, before consolidating throughout the weekend. BTC’s hourly sentiment score remained negative for the entire week.

For perspective on this insane growth – on Jan 11th alone there were more than double as many articles on Bitcoin than in all of Dec 2019 combined. There have been 6 days thus far in 2021 where there were more mainstream media mentions of Bitcoin than in entire months prior. Mainstream media mentions of Bitcoin are up 25x from lows in January 2020 and up 10x since October 2020. 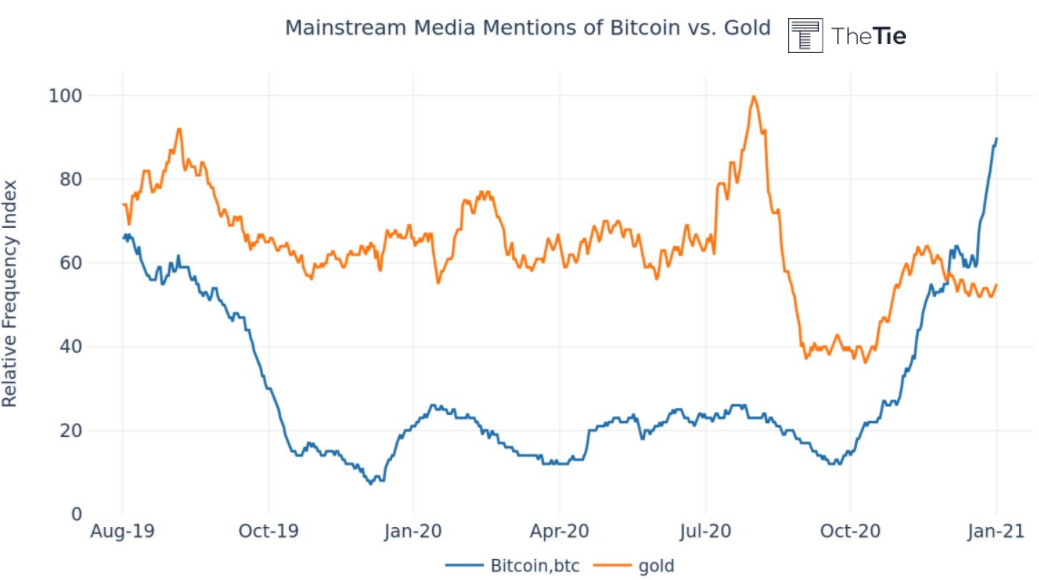 Over the past 7 days, Polkadot has been the best performer among the major cryptocurrencies, seeing a +82.3% increase. The price of DOT climbed from $9.31 to a new all time high of $16.9 on the back of a few significant developments and community excitement. On Monday, Polkadot version 0.8.27 officially launched. The Web3 Foundation has distributed over 200 grants to present so far, with 69 teams having completed the project and 112 teams have successfully delivered the first part of the work. Additionally, motion No. 253 has been submitted to the Kusama Council for voting.

Early on Wednesday morning, Polkadot officially announced that their second-tier expansion protocol Plasm Network has deployed the first parachain on Rococo V1 testnet. This sparked excitement, as this is when we see the price of DOT start to rise. Investor sentiment flipped positive shortly afterwards, remaining that way for the rest of the week.

RBW’s Japanese subsidiary will be selling its singers’ digital products on the Polkadot blockchain, according to an announcement made on Thursday. This will allow fans of K-Pop stars to buy and sell non-fungible tokens (NFT) on Hong Kong-based exchange Xeno. 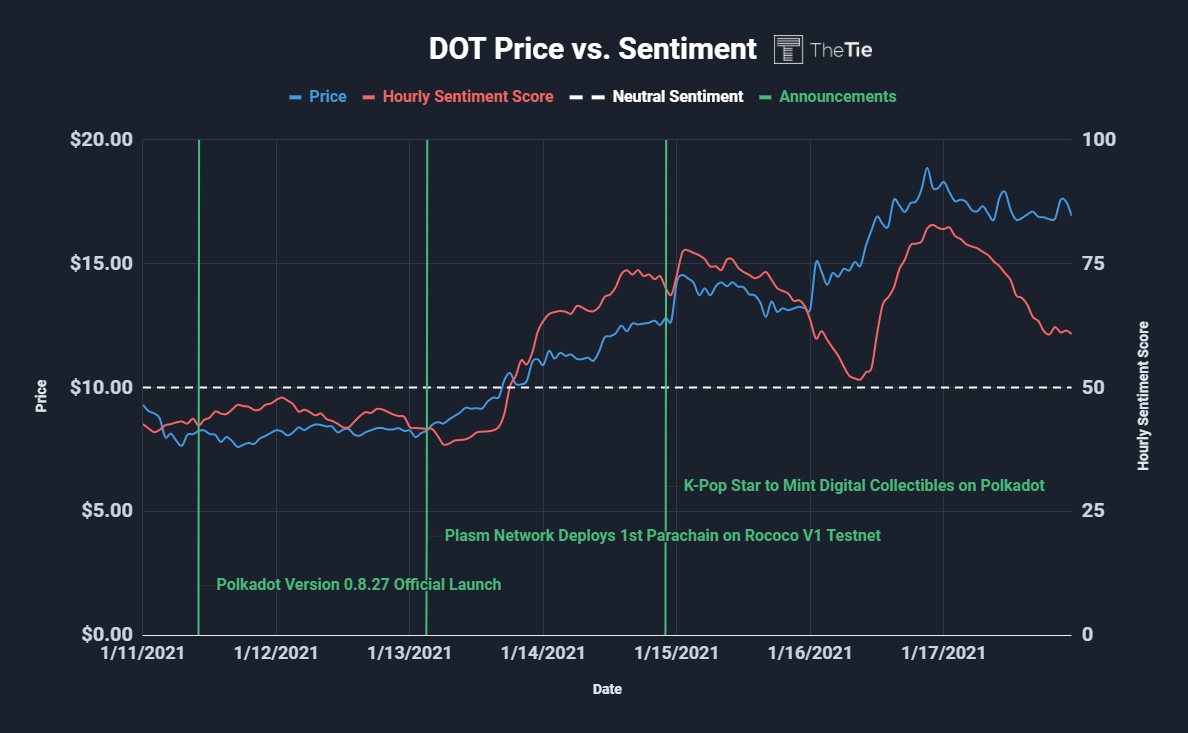 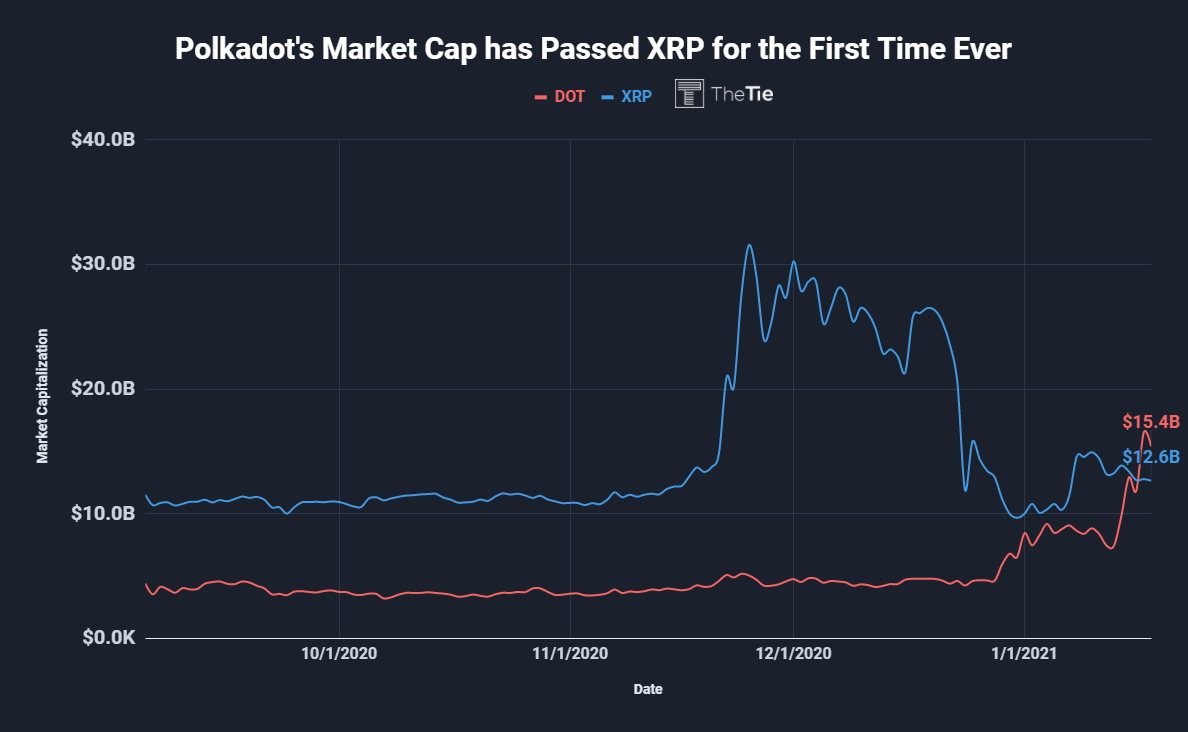 Back in August of 2020, the Link Marines helped drive the price of LINK to an all time high of $19. Back then, there were nearly 5,000 Tweets sent out about Chainlink on a daily basis. Since setting those highs, those numbers have fallen off. That is, until the new year started! The price of LINK has surged by +92.4% YTD, setting a new all time high at $22.9. Additionally, Tweet volume has increased by +45%, growing from 2,188 Tweets per day (on average) to 3,174. 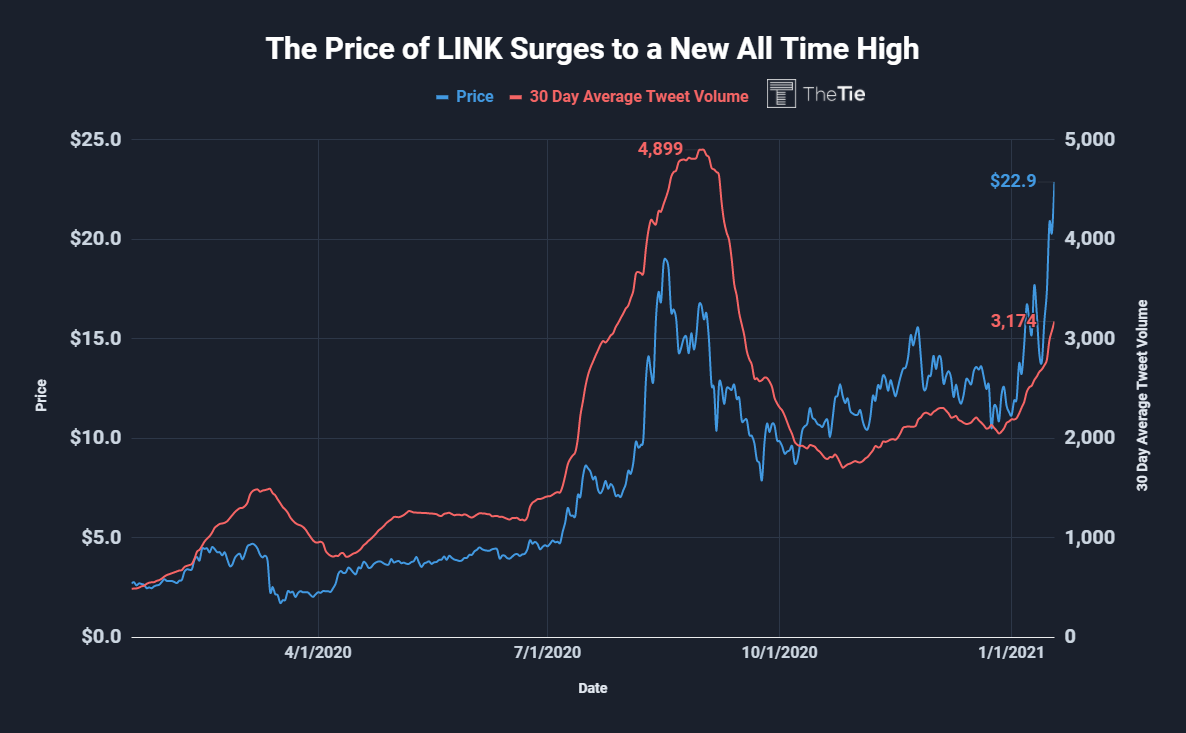 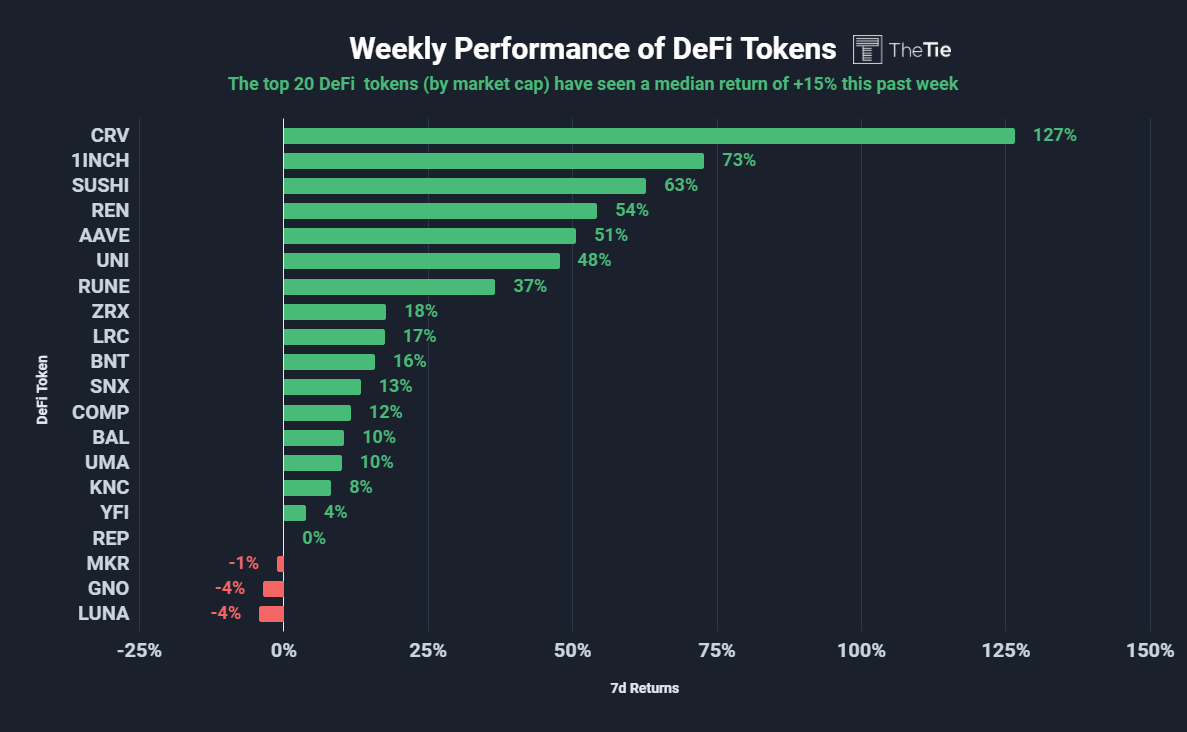 Binance Partners with Orbs Blockchain to Launch a DeFi Accelerator

Over the past few months, Yearn Finance has been on a mission to work with leading DeFi projects. This week was no different. On Friday, Curve and Yearn announced a collaboration for permissionless pool creation and stablecoin pools with a simple 3 clicks process. The market reacted well to this team effort, as the number of Twitter users talking about Curve increased by 202% to hit a new all time high. Additionally, the price of CRV climbed from $0.91 to $1.74 (+91%). On Saturday, Curve announced new Cross Asset Swaps using Synthetix as a bridge. 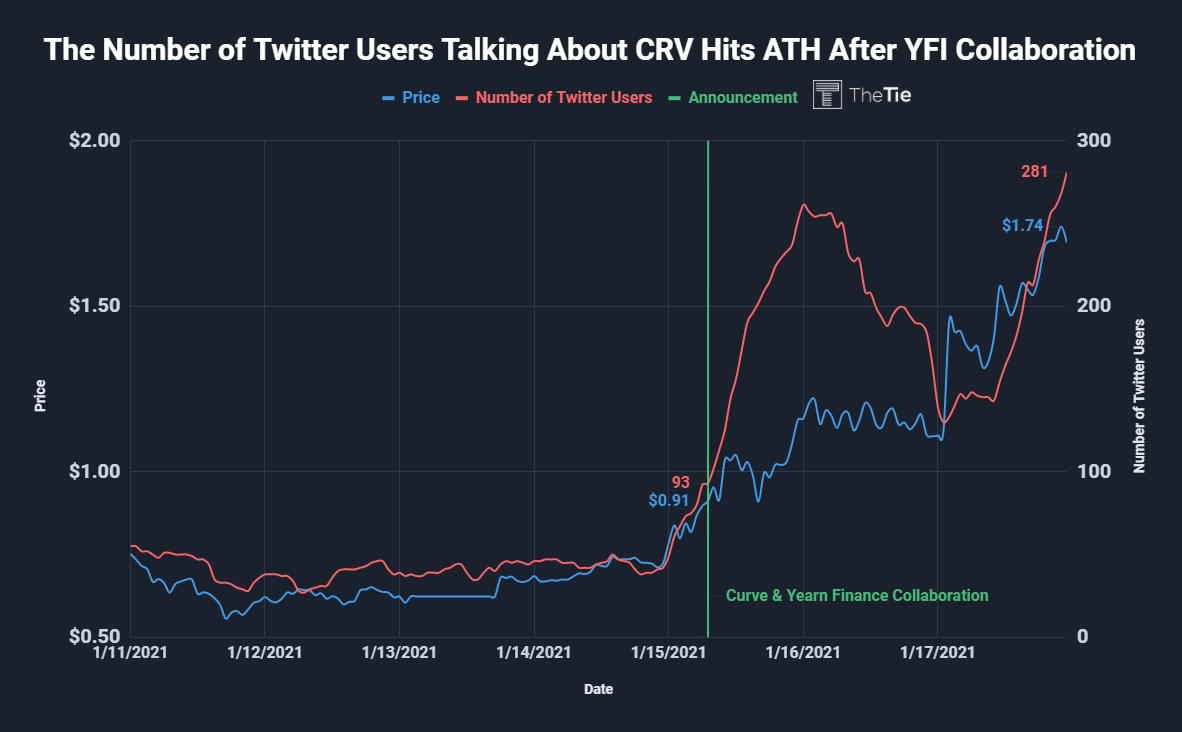 Over the past 90 days, we’ve seen a relatively high correlation between all cryptocurrencies. This is expected, as the price of Bitcoin has been pushing higher into price discovery, it drags most assets up with it. The table below shows the correlation of hourly returns over the past 90 days for major assets as well as DeFi tokens. 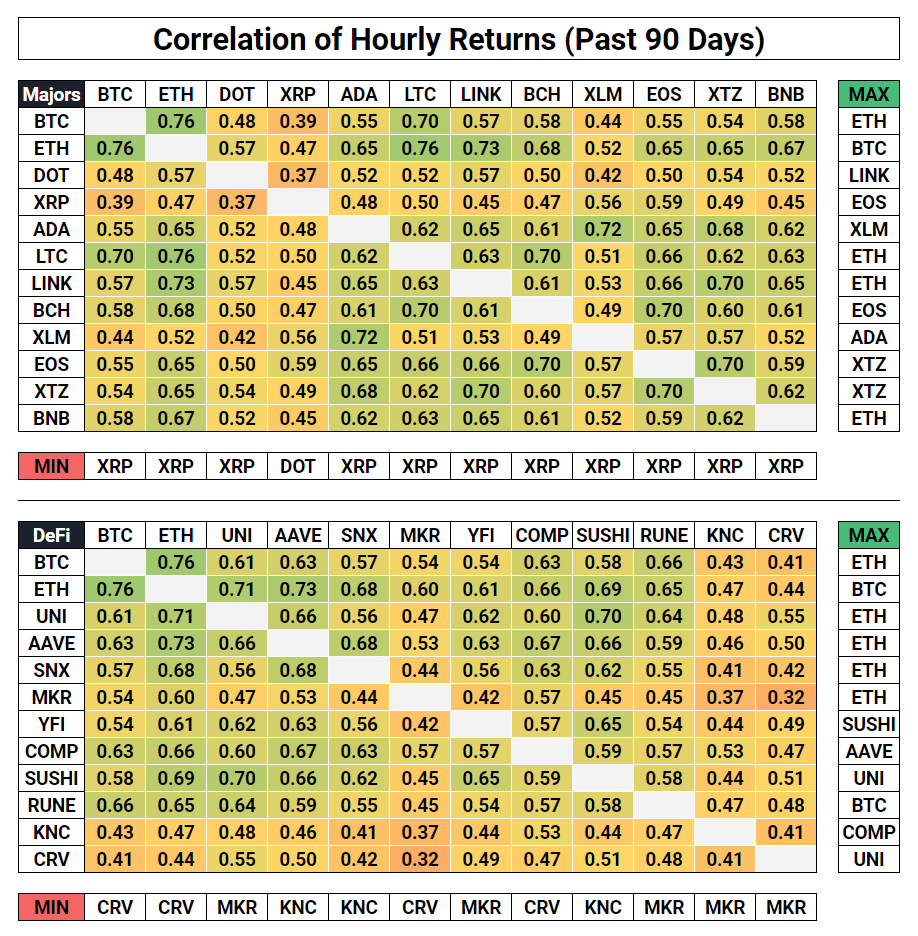 Have you ever wondered how Bitcoin performs during certain months? The visualization below shows BTC’s monthly returns since 2012, as well as the median return per month plotted as a bar chart. We can see some patterns in the data. Q1 and Q3 tend to be rather choppy while Q2 and Q4 have shown the highest returns throughout BTC’s history. 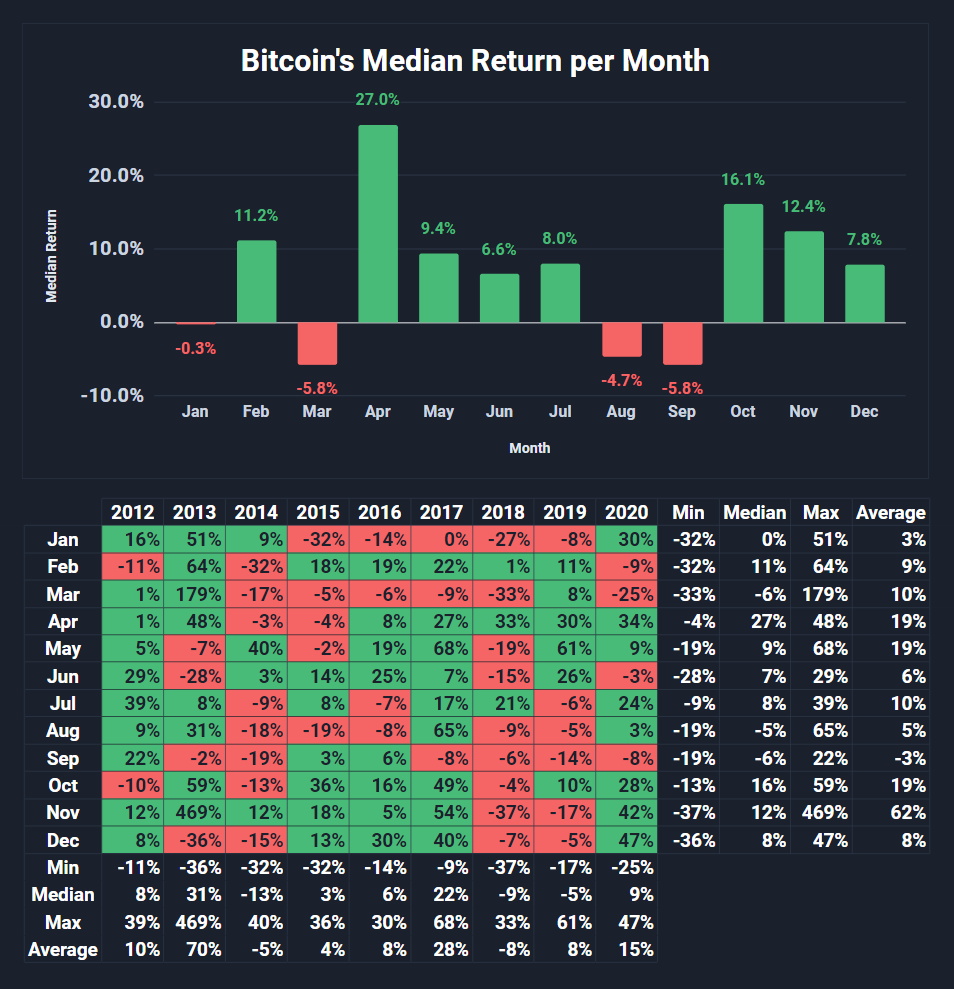 To get a better sense of seasonality effects, let’s look at returns, trading volume, investor sentiment, and tweet volume per day of week. At first glance we can see that weekdays (Mon-Fri) have been the key days to trade Bitcoin. BTC’s average return is positive for each of the 5 weekdays while dropping negative during the weekend. Sentiment seems to line up with returns, remaining positive throughout the week then flipping negative on Saturday and Sunday. The pattern continues with Trading volume and Tweet volume. The most impactful day appears to be Wednesday, as that’s when 3 out of these 4 metrics peak (on average). 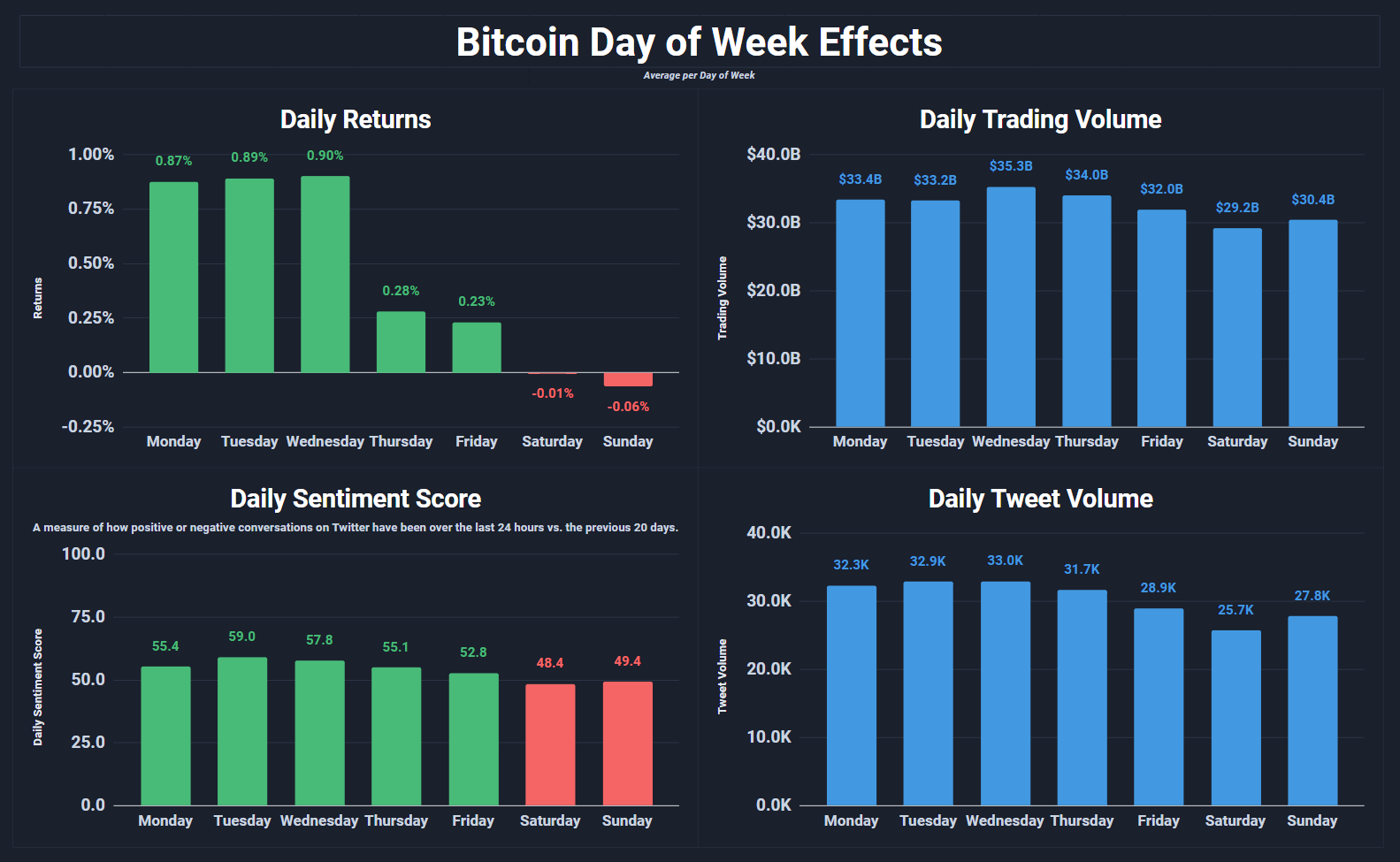 To take it one step further, the chart below shows the average return per time of day (UTC) over the past 90 days for BTC, ETH, and the top DeFi tokens. A clear pattern emerges: Mid-Asian session dip. A recent trend has shown that the market seems to sell-off around 3-4 UTC. This is followed by a bullish American session (12-17 UTC). The average return during 19 UTC is negative for every asset tested except for Maker. 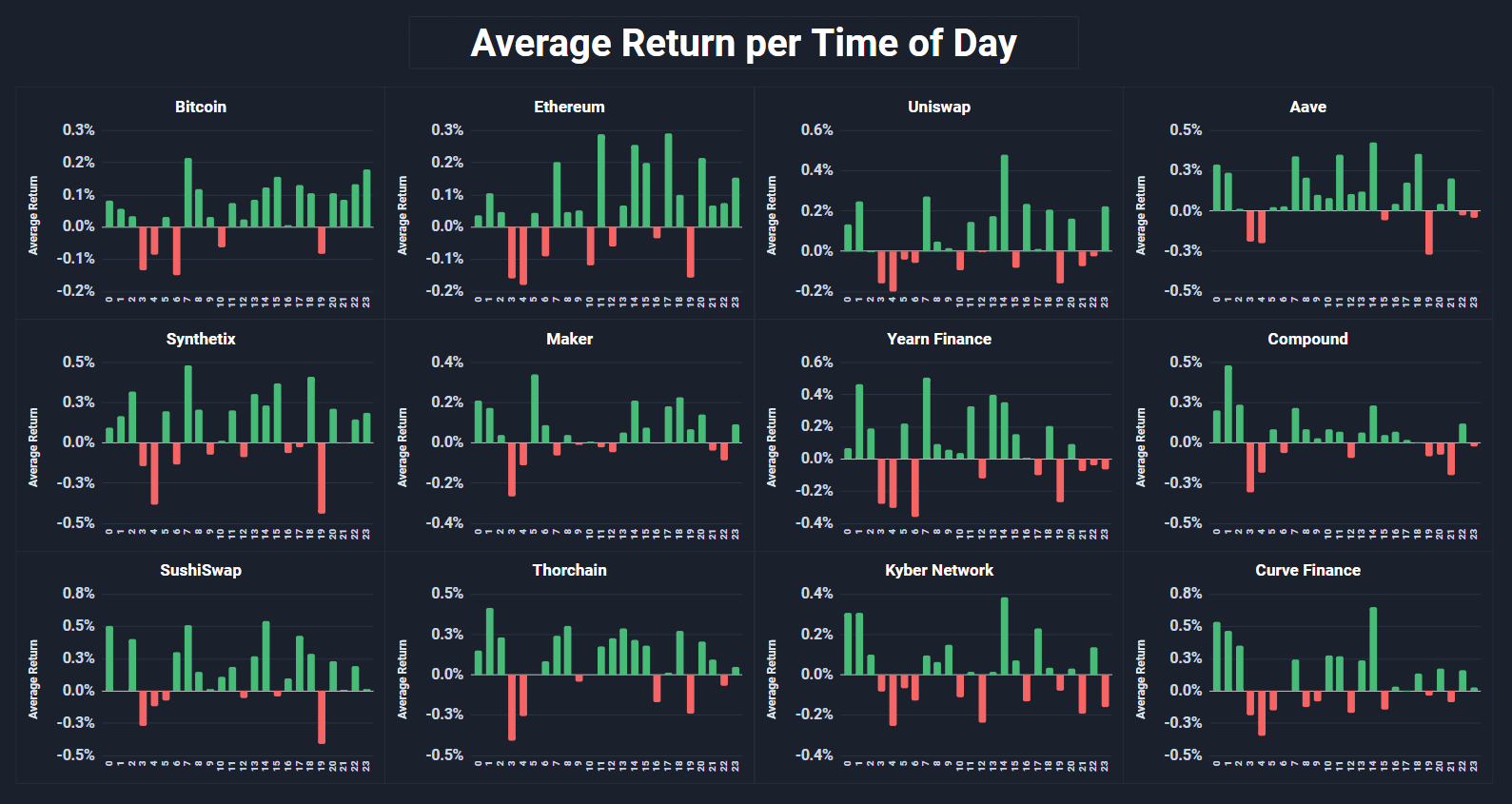 Ep. 34 – Inflation as a Part of Life: Why Venezuela Needs Crypto with Mauricio Di Bartolomeo (Ledn)
Mauricio Di Bartolomeo (Co-Founder & Chief Strategy Officer of Ledn) joins The TIE’s Fundamental Value Podcast to discuss crypto mining, why the USDC airdrop is so important to the people of Venezuela, building lending products for all, and the Latin American crypto market. Listen here