A huge week for Bitcoin as the price hit a new all time high in addition to passing $1T market cap.

The total cryptocurrency market cap increased by 18%, growing from $1.49T to $1.77T. In addition to reaching new all time highs this week, Bitcoin’s market cap has surpassed $1T for the first time in its history. The major assets saw a median 7 day return of +6.5%, as BNB led the way with massive +115% gains. Long term sentiment remains positive for all of the majors. Trading volume was down -17%, as well as Tweet volume (-3.2%). 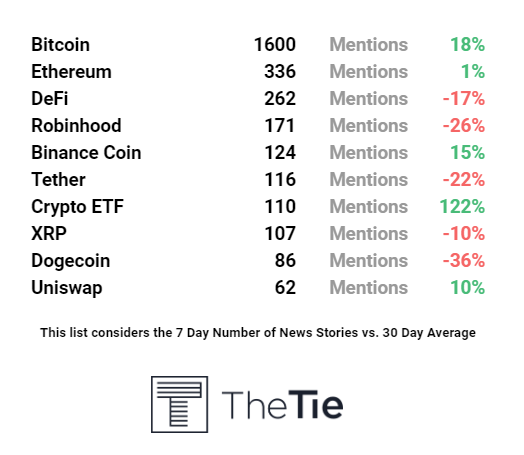 Performance of the Crypto Market

The crypto market saw positive gains over the week, despite all sectors taking a big hit on Monday. The market rebounded on Tuesday as Bitcoin and the Privacy sector led the way. As most privacy coins are currencies, the correlation between the two is typically pretty high. The ALT Index finished the week with the highest returns, despite ETH and DeFi lagging behind everything else. 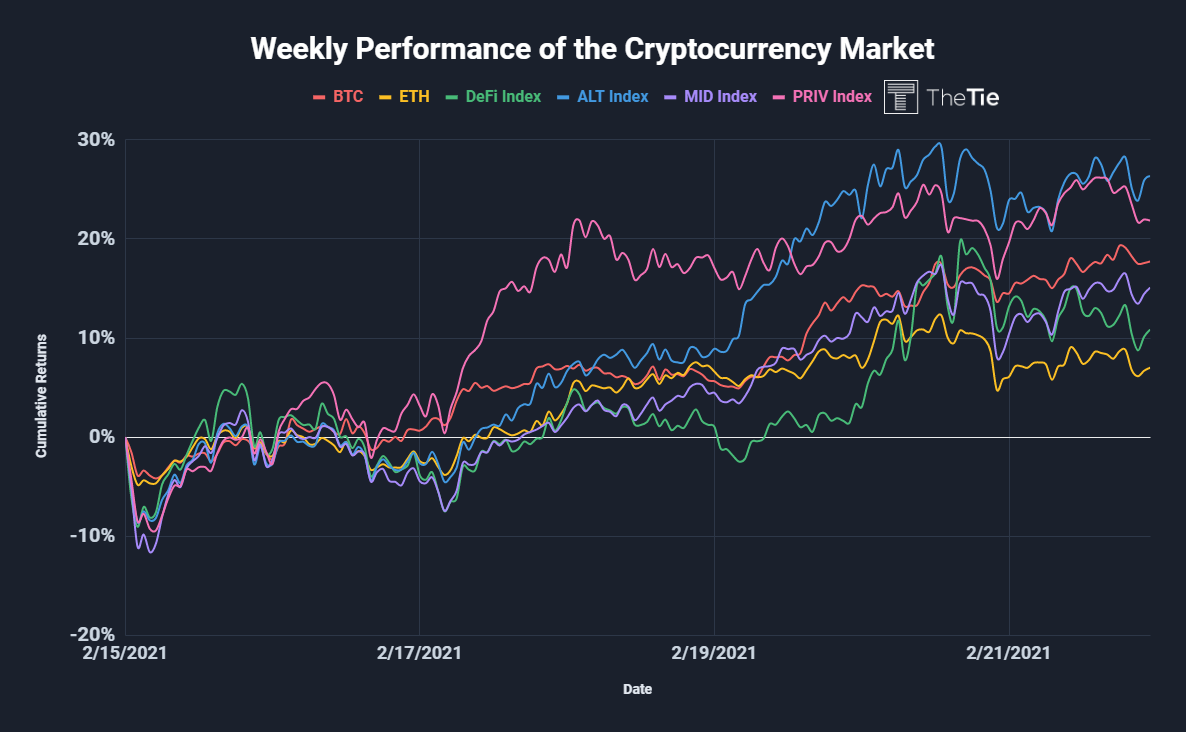 The price of Bitcoin traded within a 28% range this past week, from the low of $45,570 to the new all time high of $58,352. The week started relatively bearish, as BTC dipped -5% on Monday before trending up for the entire week. Investor sentiment spiked mid-week as talks from Morgan Stanley and Blackrock flooded the media. Additionally, an ETF launched in Canada reached $440M in AUM in just two days, highlighting institutional interest is still rising. 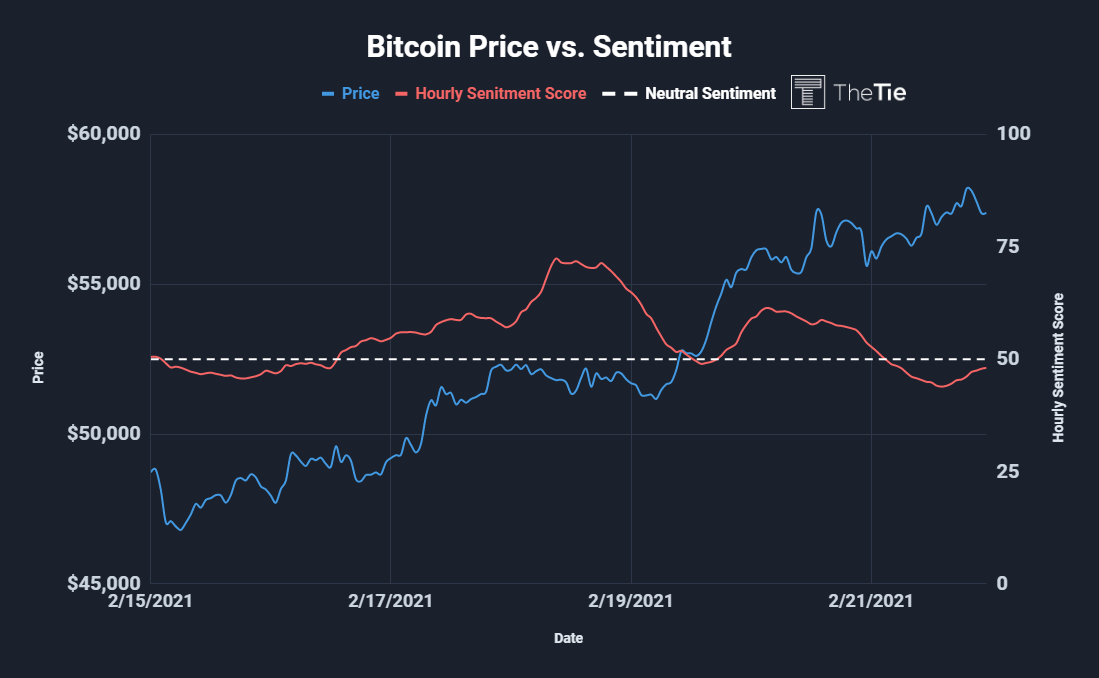 Social conversations have surged +38% this week as there were over 117,000 tweets sent out about Bitcoin on the day that BTC hit $1T market cap. Additionally, the number of Twitter users talking about Bitcoin on a daily basis has reached a new all time high of 38,500, up 325% from a year ago. 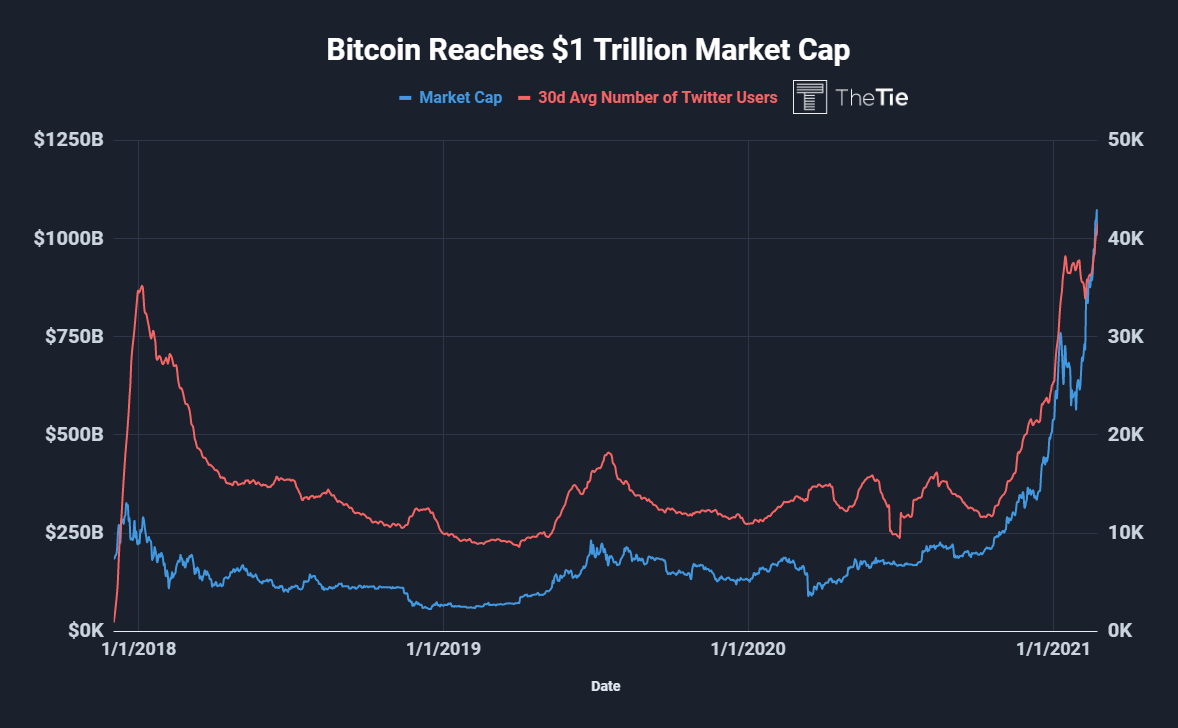 Cardano rises fast and furious on the back of a mainnet announcement and news cycle onslaught.Since a testnet fork and mainnet teaser on 2/3, $ADA has exploded with 135% returns. Tweet volume surges 146% as a news wave sparks interest, and price careens to new yearly highs! 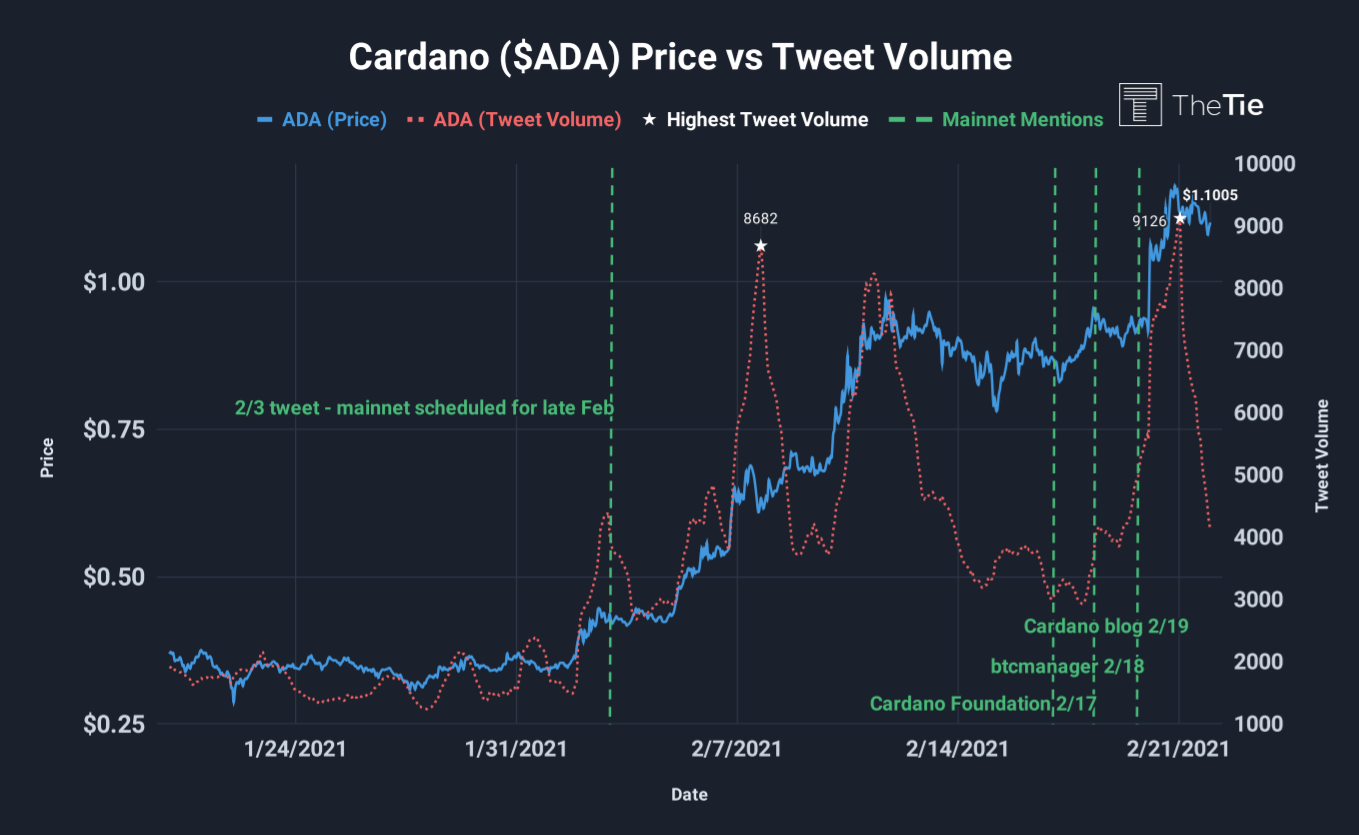 After losing $37 million in an exploit, $ALPHA tanks 39% and hourly sentiment hovers at a lukewarm 40. However, after announcing a fund repayment program with $CREAM, sentiment soars 60%, peaking at 66! Price has since recovered a stunning 20% off its lows. Is there more to come? 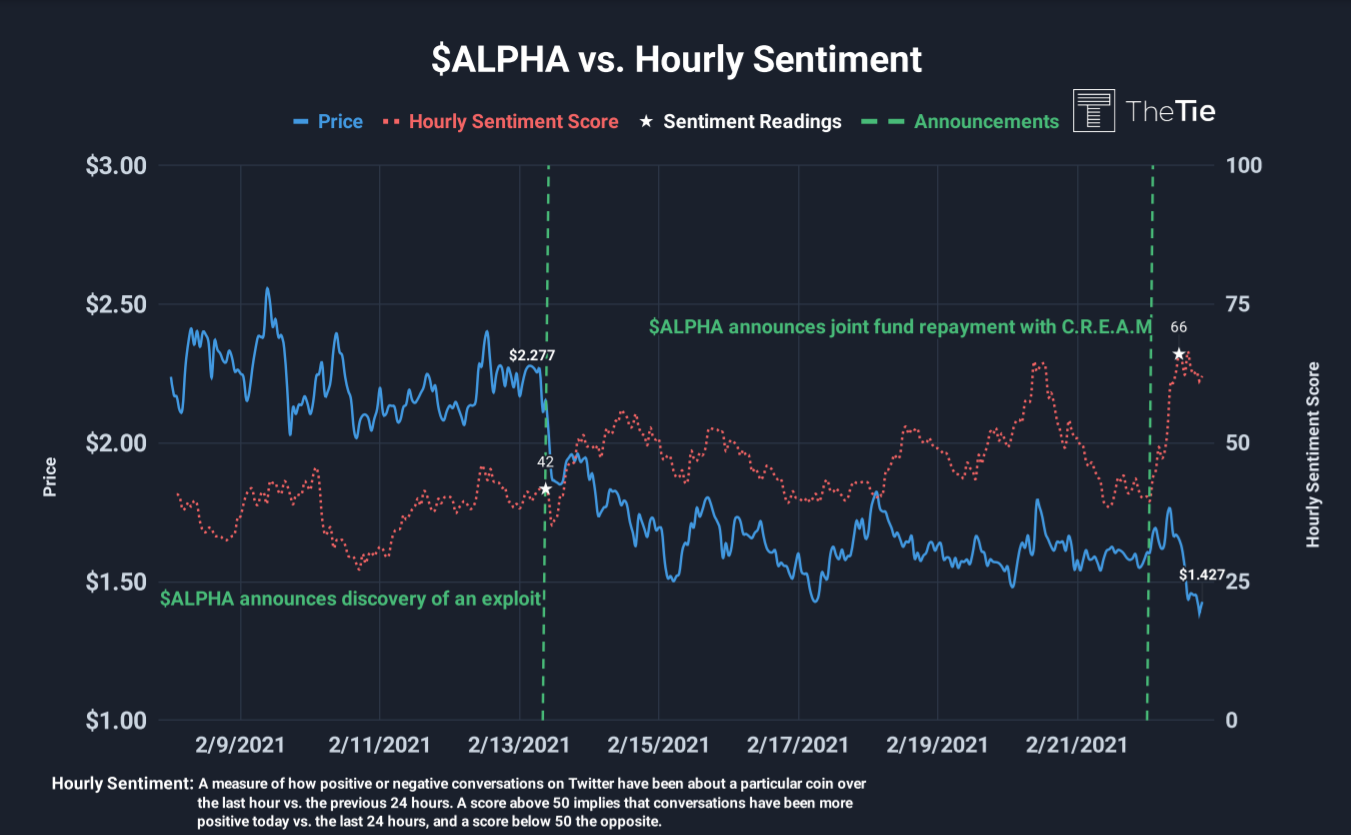 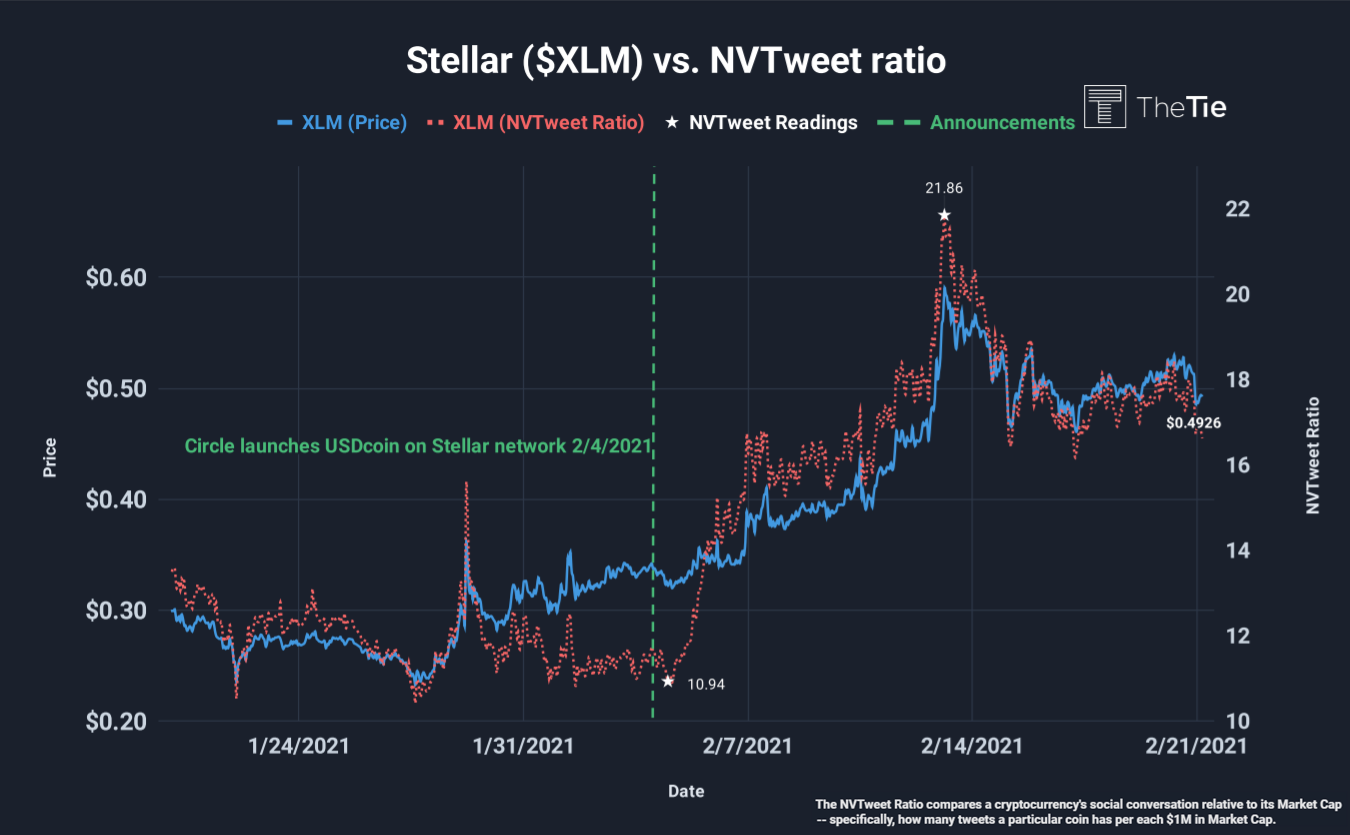 Can you teach an old dog new tricks? Litecoin $LTC joins the DeFiChain “DeFi-train” and discussion surrounding this aged coin more than doubles. Prices rise 28% but conversation has since tapered off. Does Charlie still have bite? 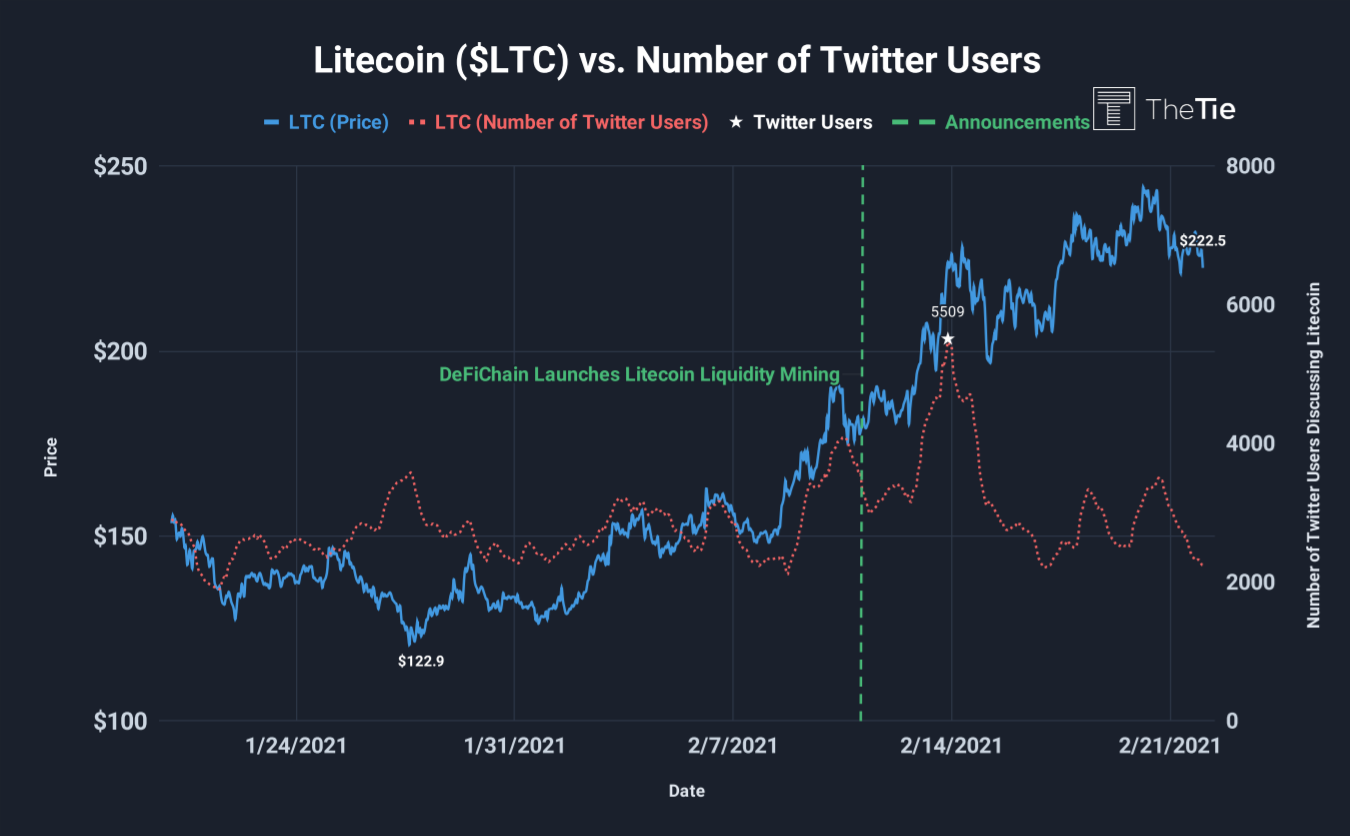