The crypto market experiences its first pullback in weeks as every major asset saw negative double digit returns except for ADA. Bitcoin Tweet volume surges to 2.2M in February.

The cryptocurrency market took a big hit this week after trending upwards for nearly a month straight. The total crypto market cap decreased by -20%, falling from $1.77T to $1.42T. The median asset return was -22.6% over the past 7 days, as every major asset saw negative double digit returns besides ADA (+19.3%). Despite a strong correction, investor sentiment remains positive as indicated by The TIE’s Long Term Sentiment Score. Every major asset has a high score (above 60), with the median score being 75.6. Trading volume was up +3.7% this week. Tweet volume was down -7.2%, as ADA (+80.7%) and USDT (+30.3%) were the only two assets to increase in social conversations. 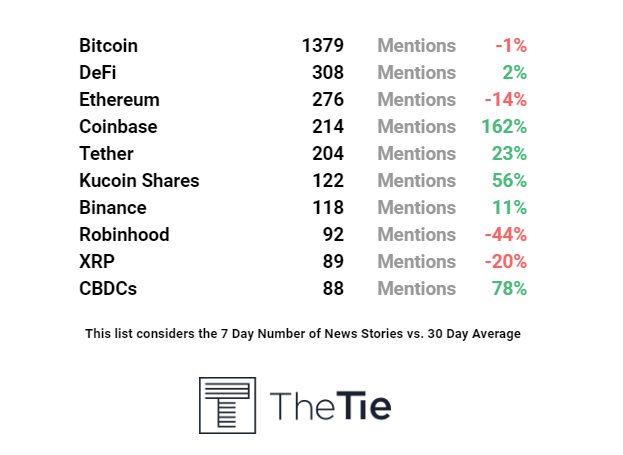 The price of BTC traded within a 33.7% range this past week, setting the high at $57,508 on Monday and trending down all week to set the low at $43,000 on Sunday. This was Bitcoin’s first down week after a strong of 4 consecutive up weeks. The sell-off was exaggerated by a cascade of $6B in liquidations of leveraged long positions across derivatives exchanges. Short term sentiment, indicated by The TIE’s hourly sentiment score on the chart below, was negative for the entire week and reached its low of 32.6 on Tuesday. 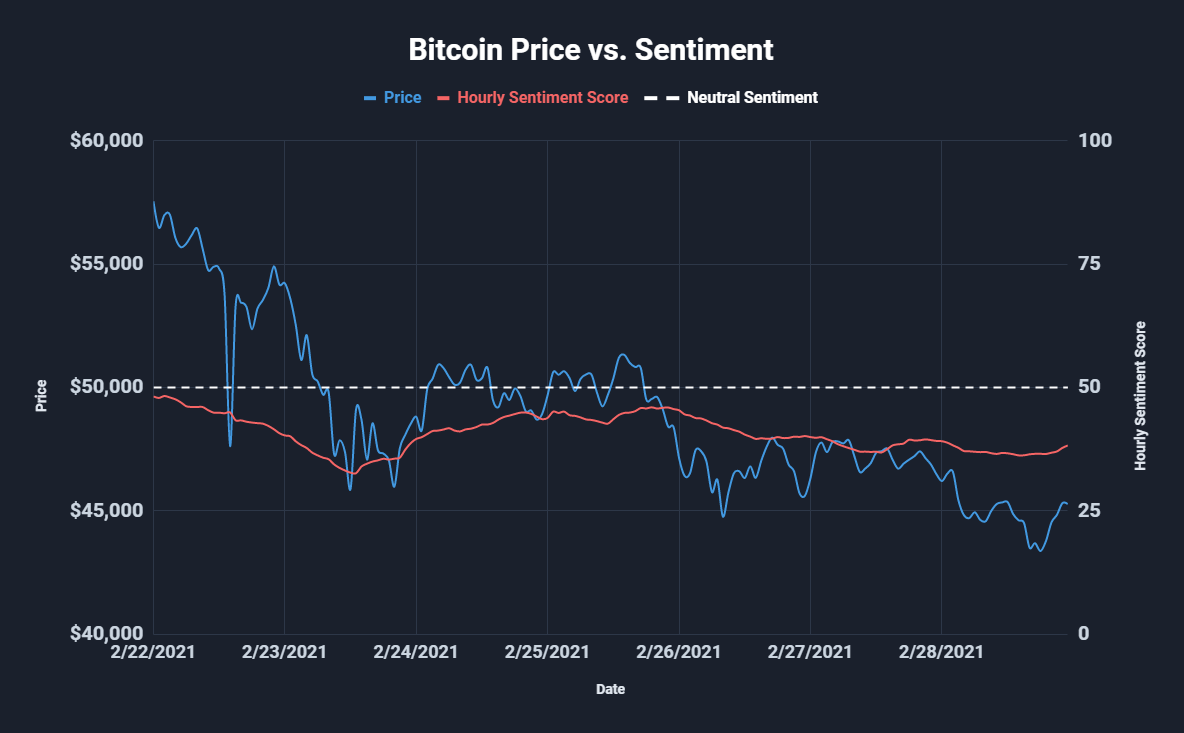 After hitting a 3 year high of 2.1M in January, Bitcoin Tweet volume has continued to surge to 2.2M in February. Social conversations are up 170% from a year ago, with most of that growth happening during Q4 of 2020. 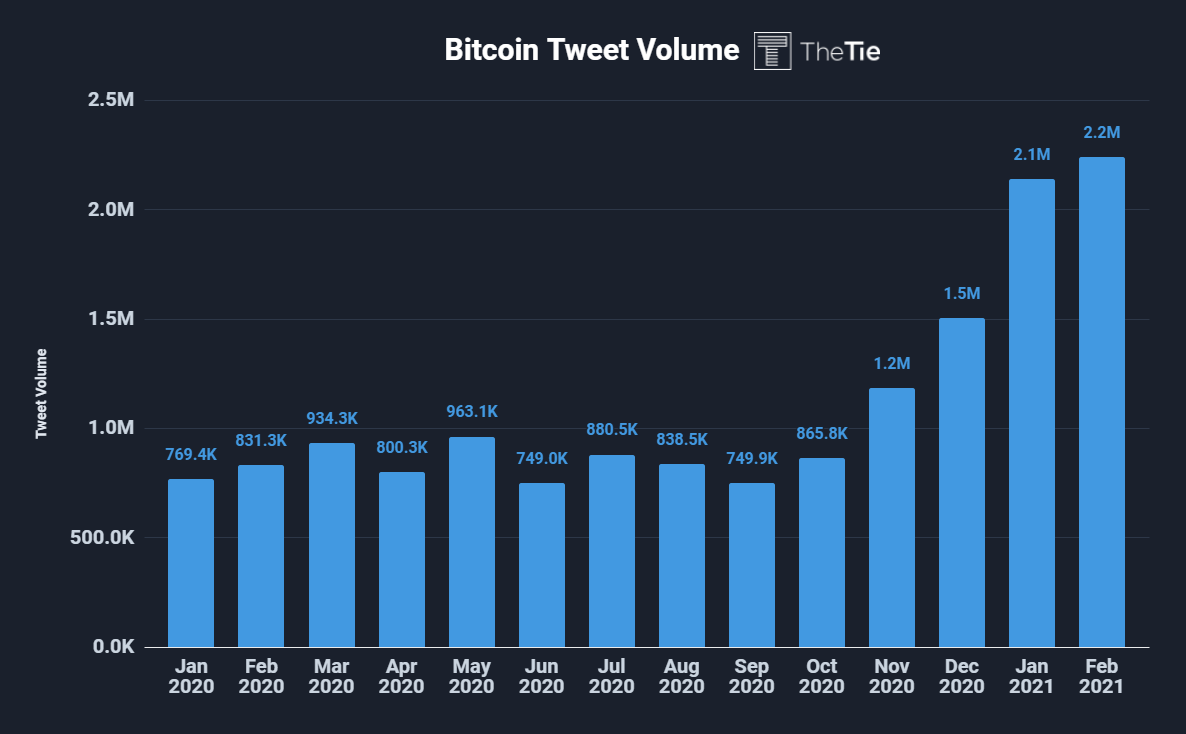 You get a DeFi! Everybody gets a DeFi! Bitcoin Cash $BCH enters the yielding ring with a $3mil investment in their only BCH native DeFi platform, but at writing TVL stands at just $130k. Daily Sentiment score rose from 33 to 87, and price spiked 8%, but does anyone care?! 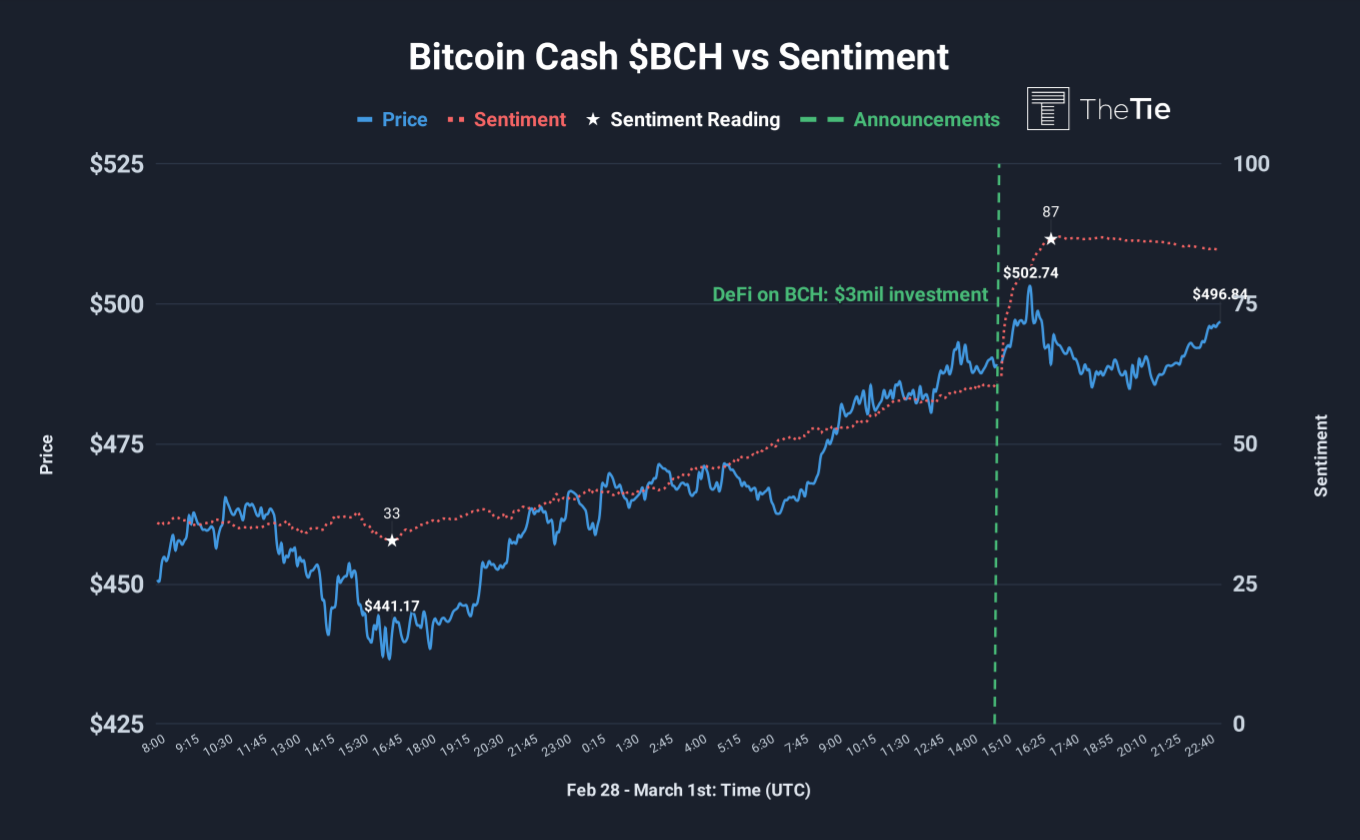 Twice as many of you care! The number of twitter users chatting about Bitcoin Cash increased twofold from a low of 582 last night to 1,151 currently, increasing the total number of tweets mentioning $BCH from 884 to 2,040. What’s next for that other “Bitcoin”? Our vote is NFTs. 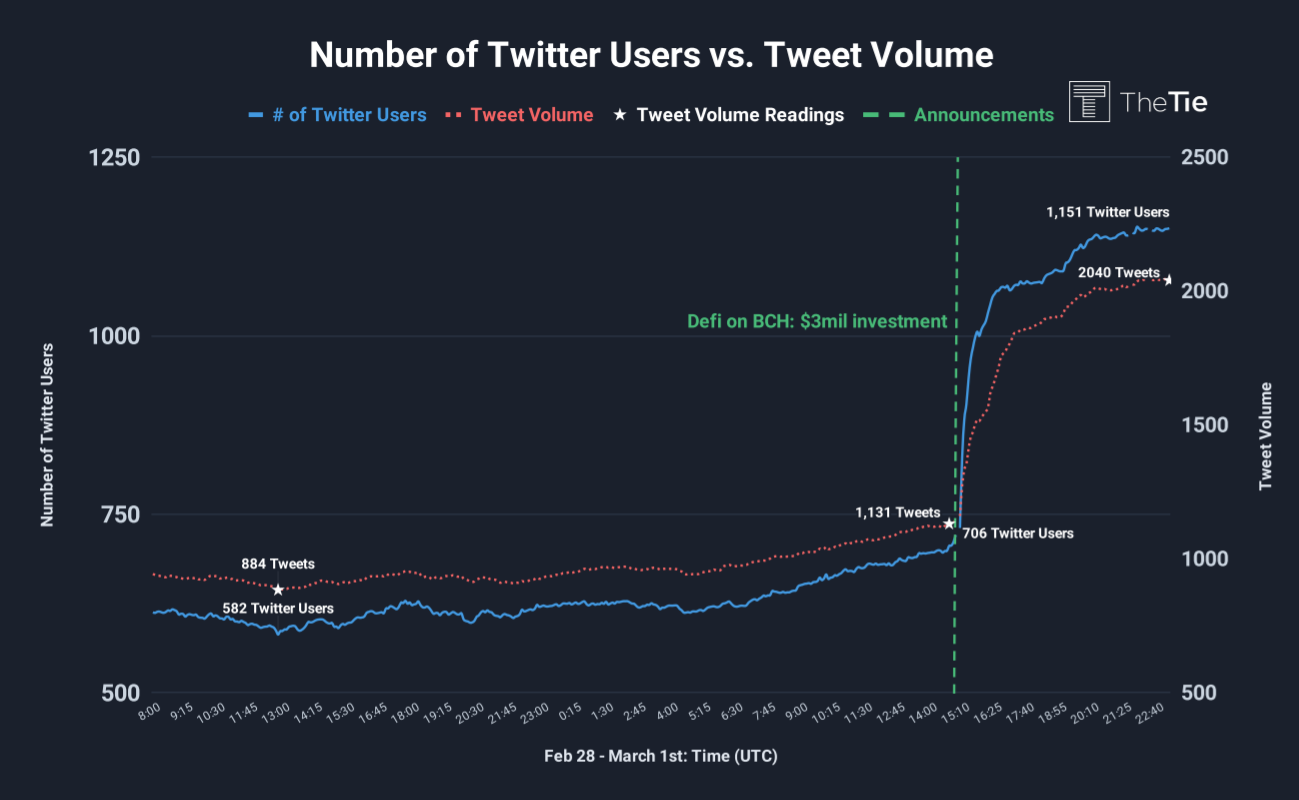 Uniswap has dominated the Twitter game ever since launching UNI token. The number of Twitter users talking about UNI on a daily basis has grown from 1.1k to 2.2k since January 1st, an increase of 100% YTD! 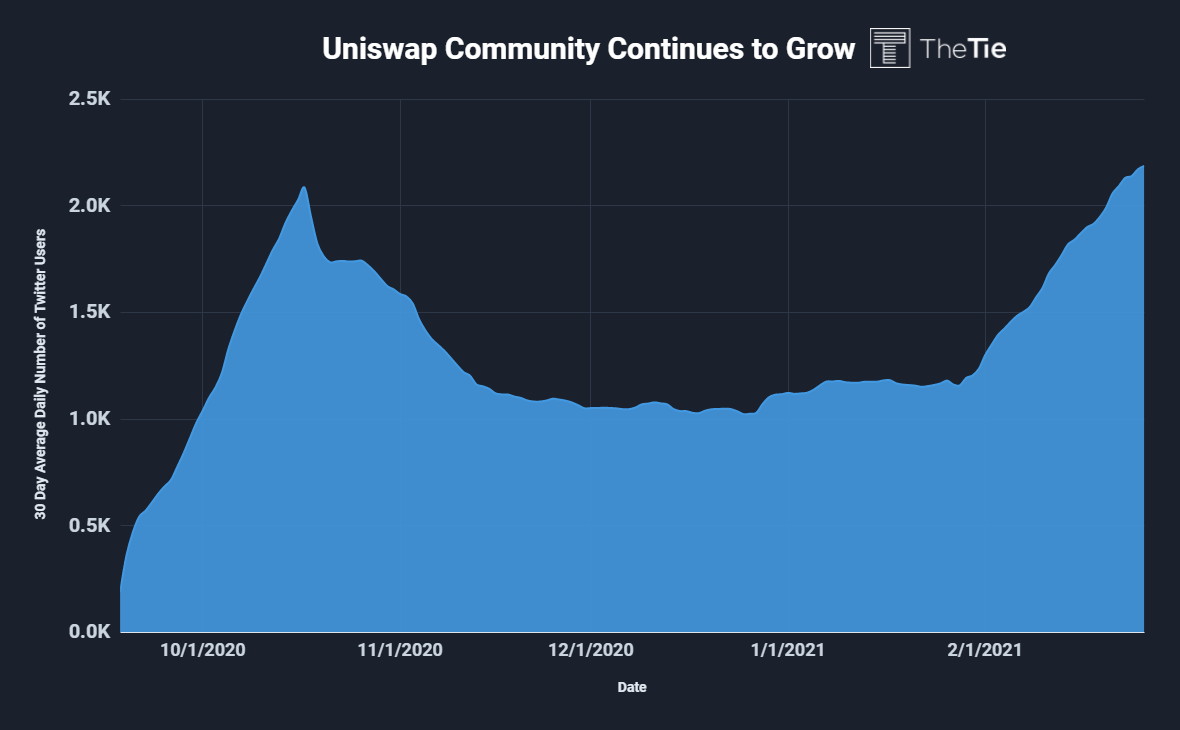 The month of February started off very strong for the entire crypto market. Each sector saw gains of +50% and higher up until February 21st, in which prices started trending downwards to close out the month. Despite the pullback this week, all sectors performed positively over the past 30 days. 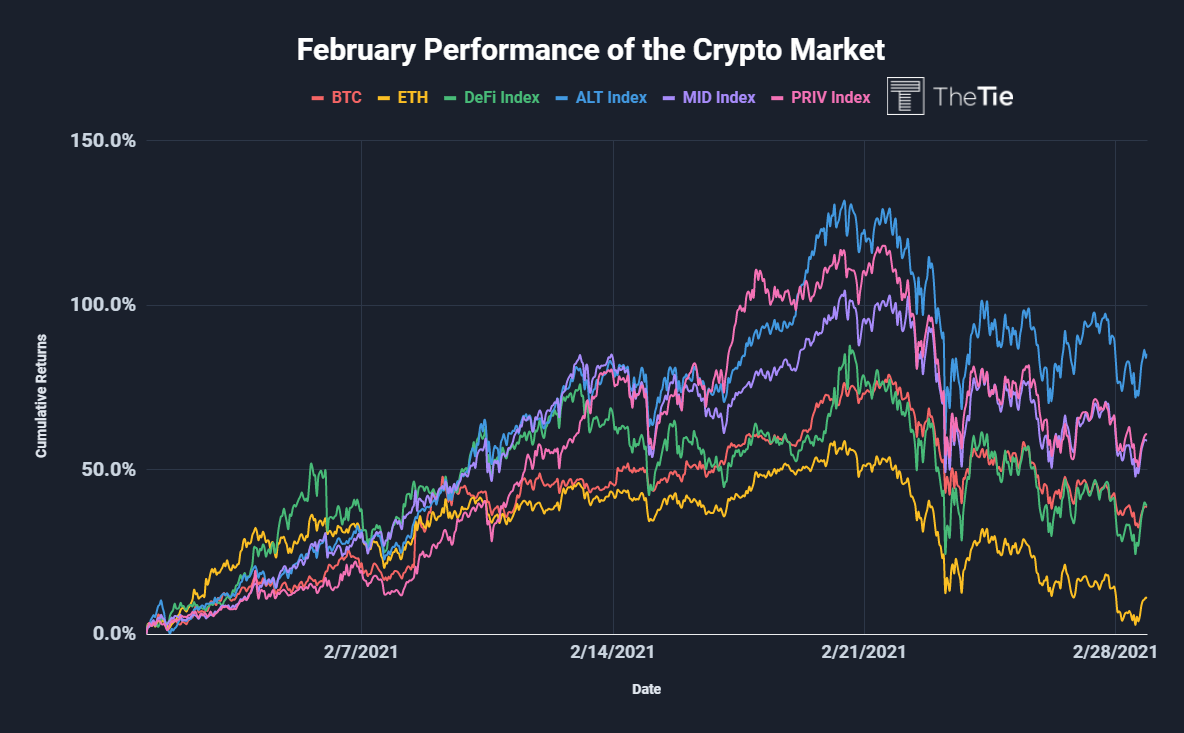 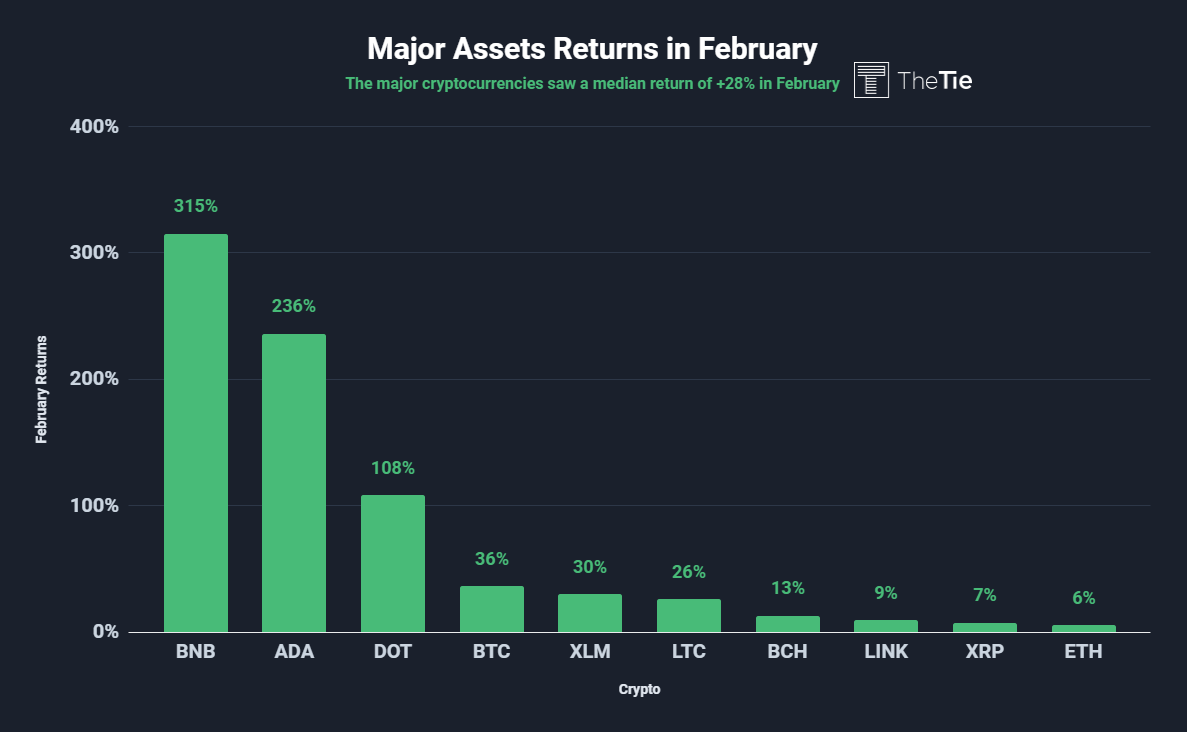 The chart below shows the percentage change in each asset’s 30 day average number of Twitter users over the course of February. By no surprise, the two assets to see the biggest community growth are the same two assets that saw the biggest returns. The number of Twitter users talking about BNB (+313%) and ADA (+168%) have both increased by triple digits. 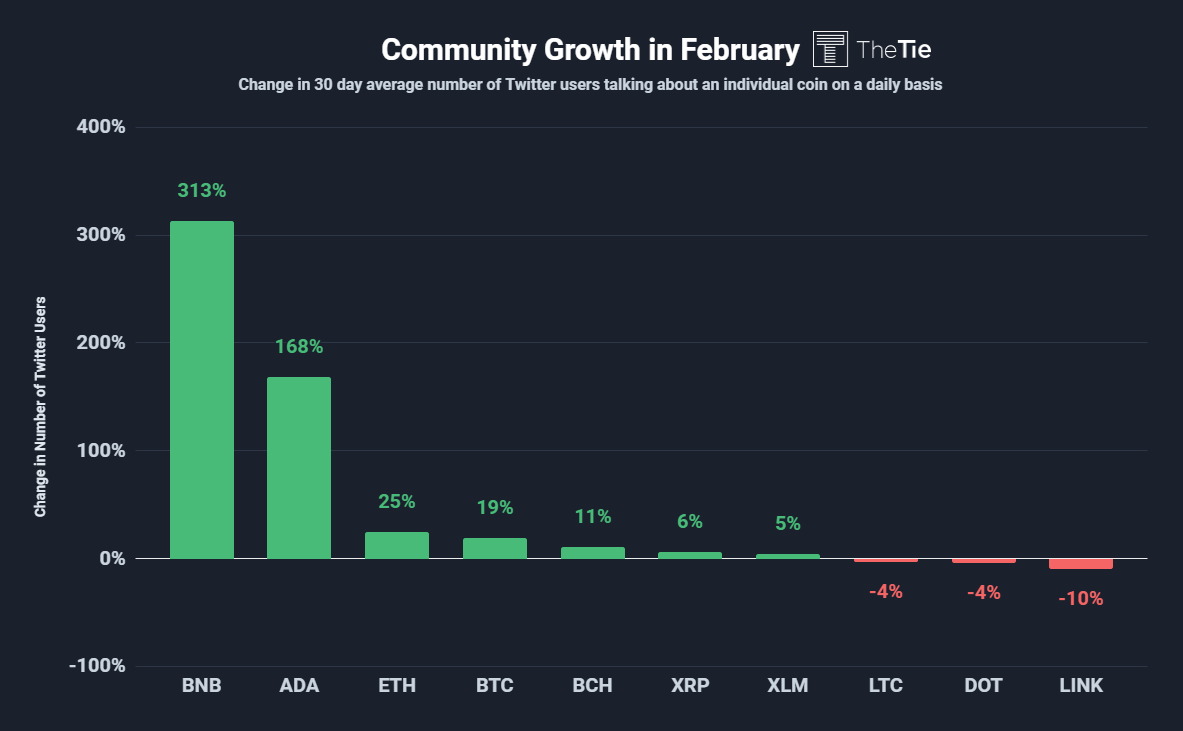 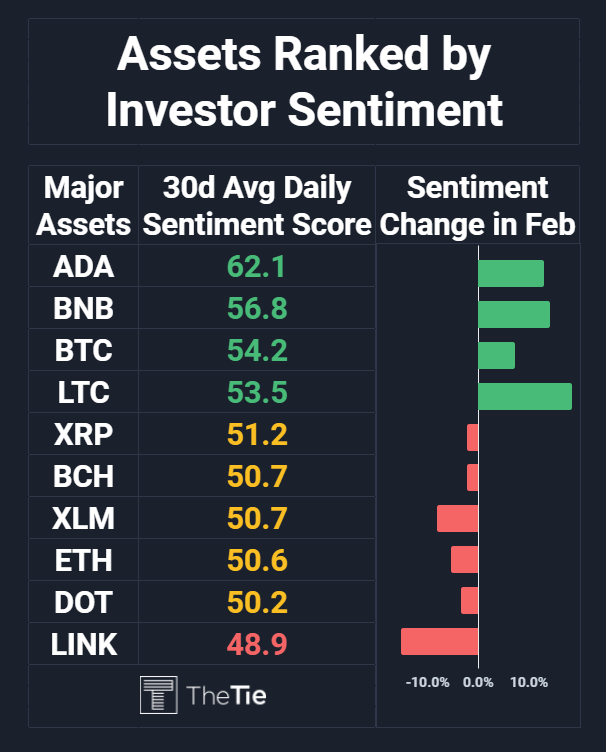 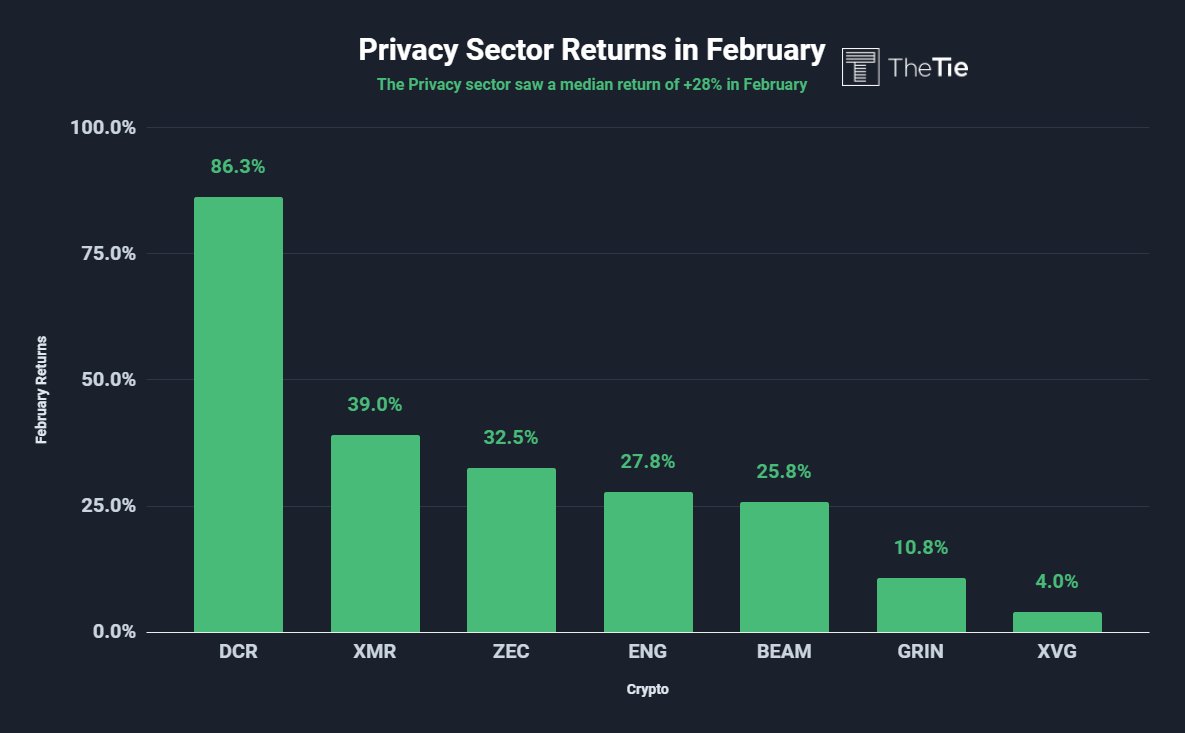 Despite having a rather slow start to the year, $DCR experienced tremendous growth in February. This uptrend started after Decred v1.6 was released and picked up even more momentum after DCR was listed on its 1st African exchange, pushing the price from $50 all the way up to $164. 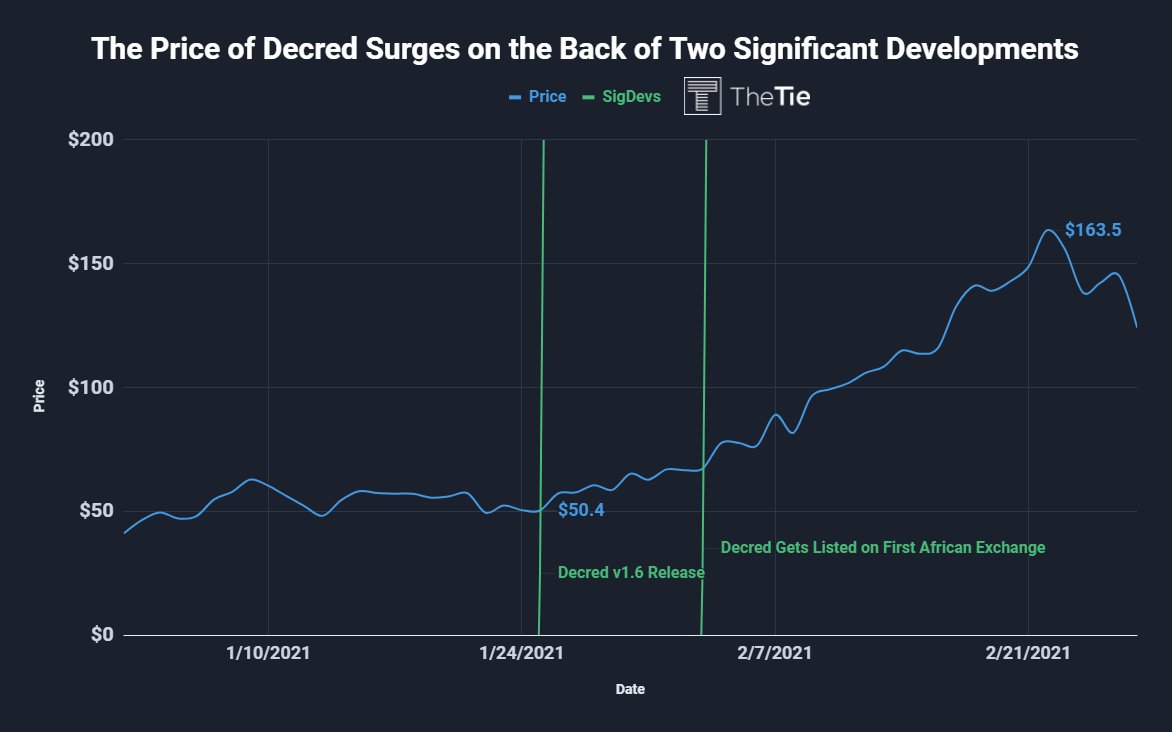 XMR’s price rally can largely be attributed to investor sentiment. We saw a big spike in sentiment after a community video called Monero Means Money was released. Additionally, the price of XMR reacted positively to being listed on Poloniex Futures as it surged by +118%. 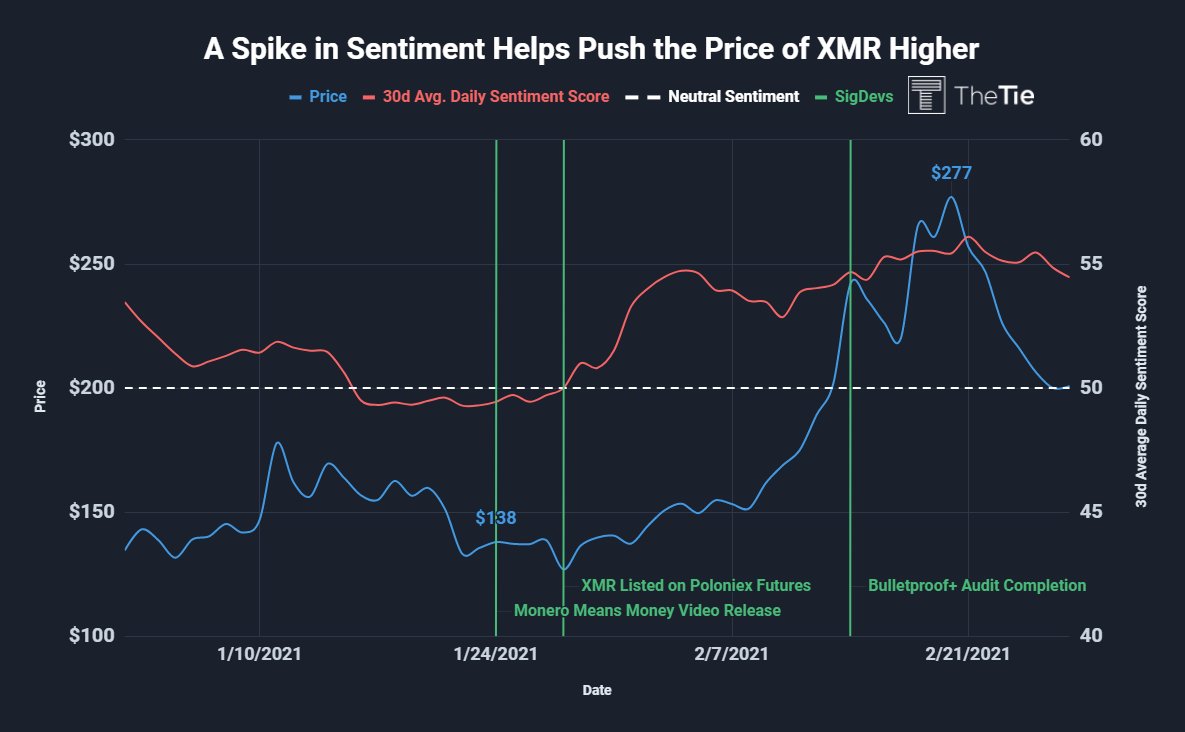 After hitting a record high of 40k in Jan, aggregated Tweet volume has fallen -23% to 30.4k in Feb. While this may sound alarming, note that social conversations are still up 35% from a year ago! Additionally, the 30.4k Tweets in Feb are still higher than any single month in 2020. 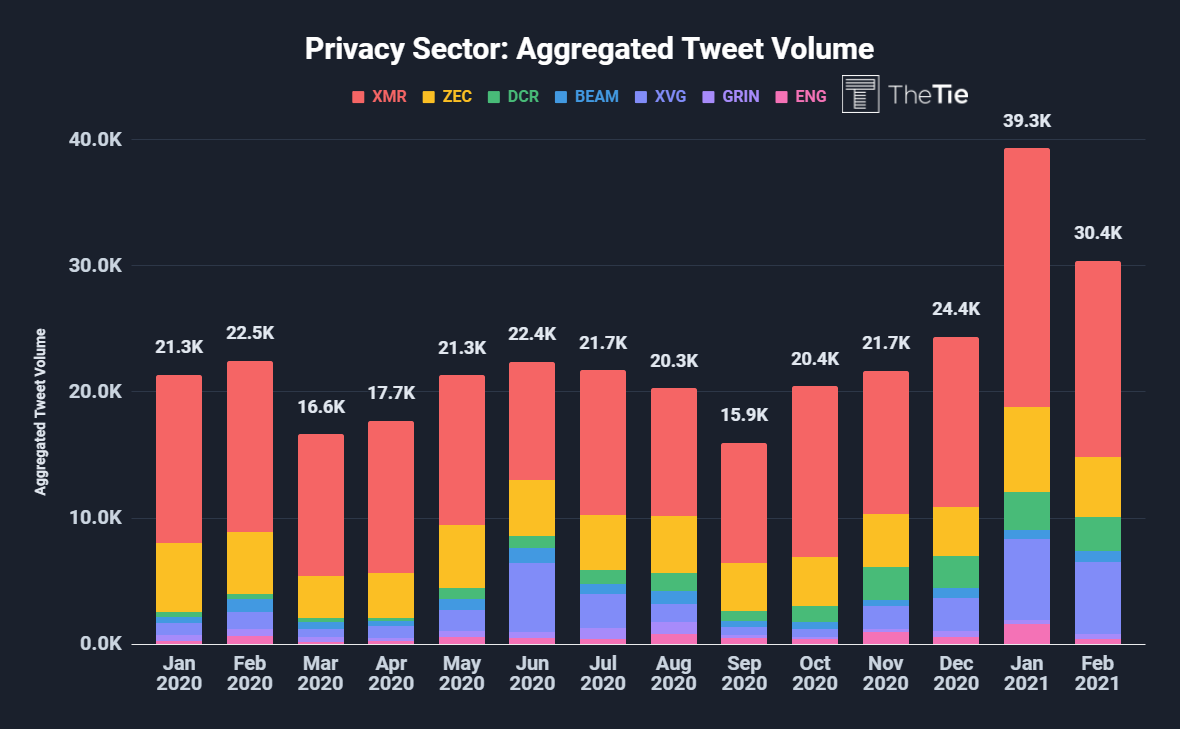 Investor sentiment has become increasingly more positive for $BEAM, $XMR, & $DCR over the past 30 days. On the contrary, assets like $XVG and $ZEC have seen a decrease in sentiment, but remain rather neutral. $ENG currently has the lowest avg sentiment score of any privacy token. 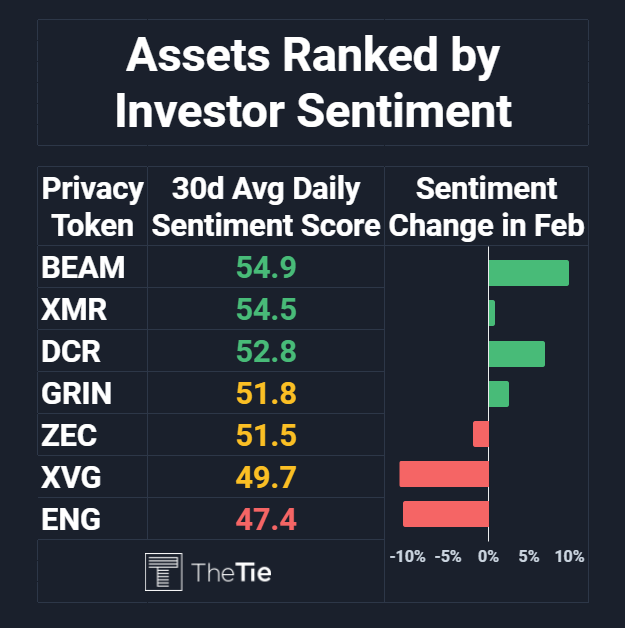 View our open roles at https://thetie.io/careers