Currencies and NFTs were the sector leaders this past week with both experiencing +28% returns. Every major crypto sector saw positive returns of 20% and above.

The price of Bitcoin traded within a 20% range, from the low of $52,000 set on Monday all the way up to the high of $58,550 set on Saturday. Short term sentiment was mostly positive throughout the week, with a few announcements that helped spark excitement. To add to its quickly growing product suite, Gemini partnered with Mastercard to launch a crypto credit card with rewards paid out in BTC.

2021 has started out hot for Bitcoin’s social conversations, with Tweet volume growing quicker than ever before. There have already been 8.5M Tweets sent out about BTC this year and we are only wrapping up the month of May. When comparing where we are relative to past years, we can see that there have been 2M more Tweets so far in 2021 than in 2018, 5.7M more than 2019, and 5.3M more than in 2020.

So far this year, we’ve seen Layer-2’s grow in popularity as the search for new solutions that can help the Ethereum blockchain scale to keep up with competition reaches new heights. One stand out project has been Polygon, or formerly known as Matic Network. Polygon has launched a $100M ‘DeFi for all” fund intending to make DeFi accessible to the next million users. The price of MATIC has grown at a tremendous rate of +4350% YTD, climbing from $0.02 all the way up to reaching a new all time high of $0.89 earlier this week. This has caused Tweet volume regarding MATIC to surge 747%, hitting a new yearly high of 3,331.

Earlier this week, Aave Improvement Proposal 16 went live for Aave governance voting. AIP-16 is a proposal to introduce liquidity incentives for Aave V2. The proposal received overwhelming yes votes from the community, passed on April 26th, and executed on April 27th. As shown on the chart below, investor sentiment was negative up until the point that AIP-16 was proposed. The TIE’s hourly sentiment score steadily increased from there on, even flipping positive and running up +105%. The price of AAVE has surged by +39% since AIP-16 passed. 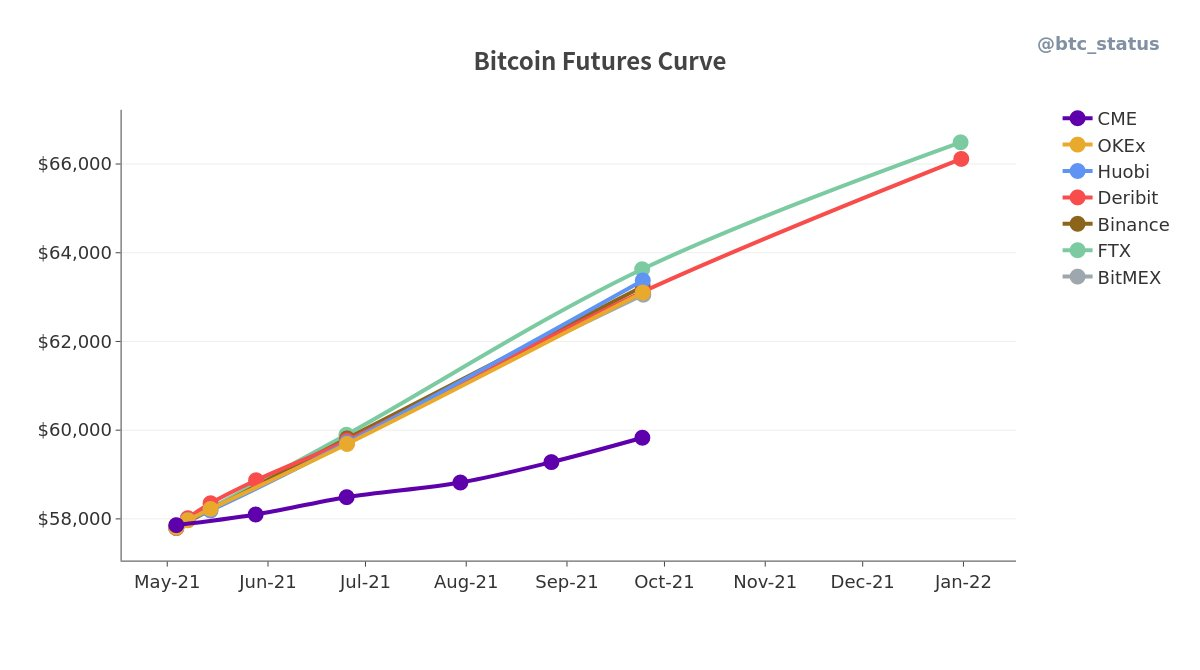 As Bitcoin pushes $60,000 once again, the futures curve remains bullish. The CME exchange’s curve has smoothened, compared to last week when the back-end contracts showed a $3k premium and the front-end months were flat. 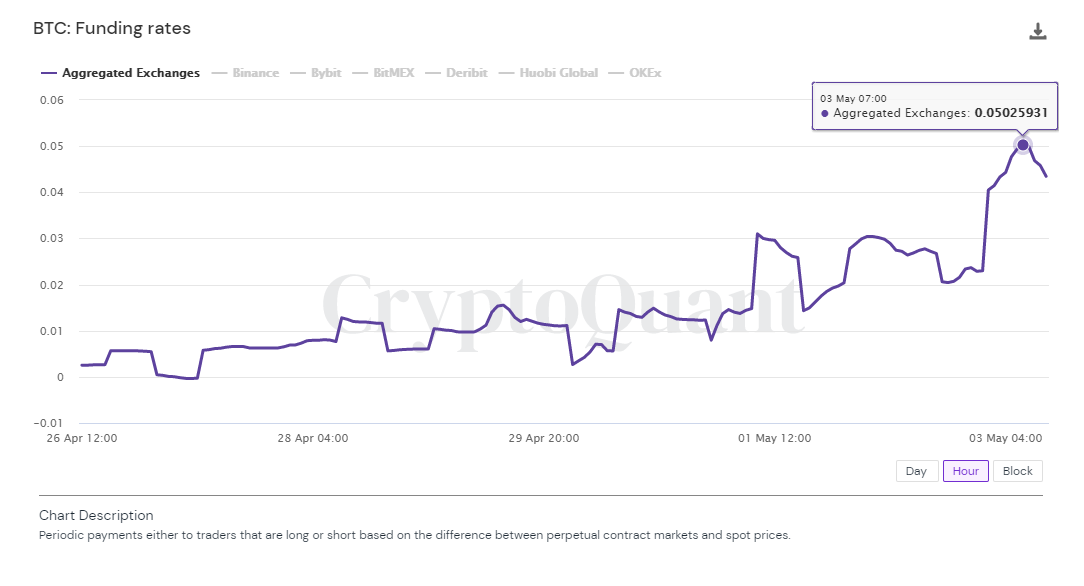 After starting the week with a sell-off that effectively reset aggregated funding to 0%. As bullish momentum returns to the crypto eco-system, funding has peaked at 0.05% for Bitcoin. 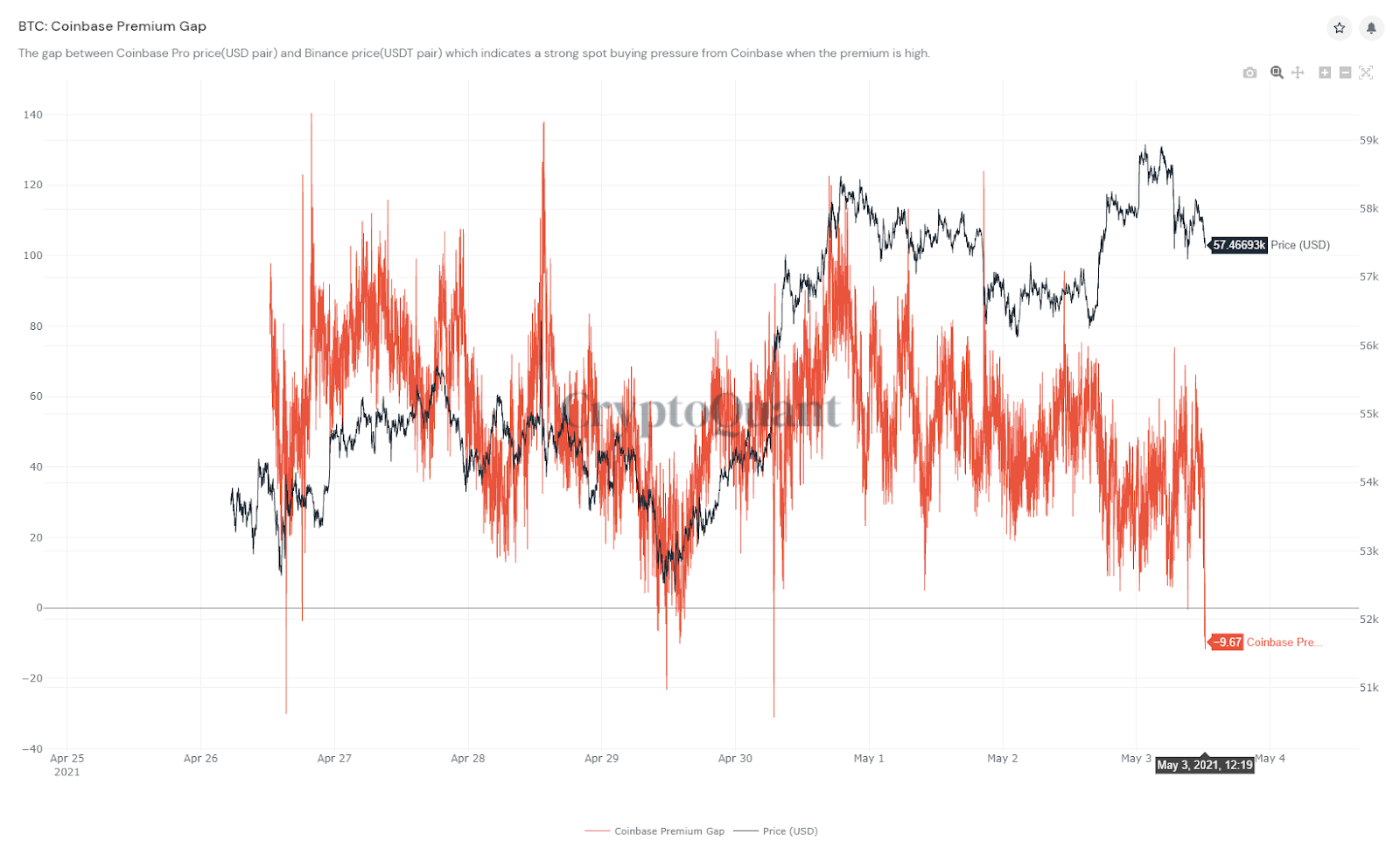 Coinbase premiums mainly stayed positive throughout the week, peaking at $140 while mostly hovering between $20 and $80. The premium is currently negative, albeit slightly, as bitcoin struggles to tackle all-time highs. 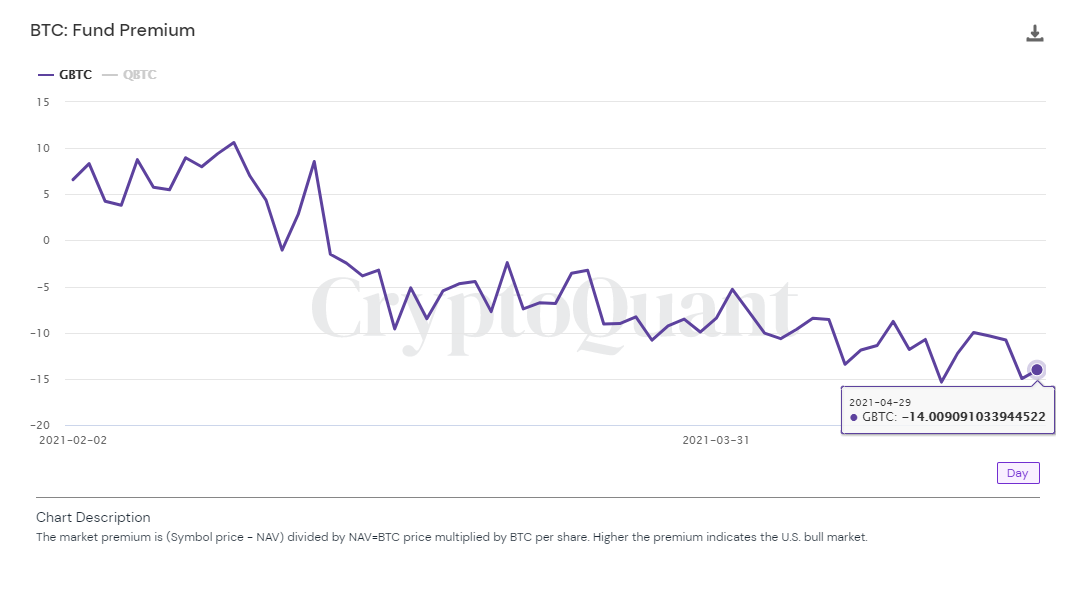 The Grayscale premium extends its plummet, finishing the week at -14.00%. It remains to be seen if the ETF conversion can close the premium. 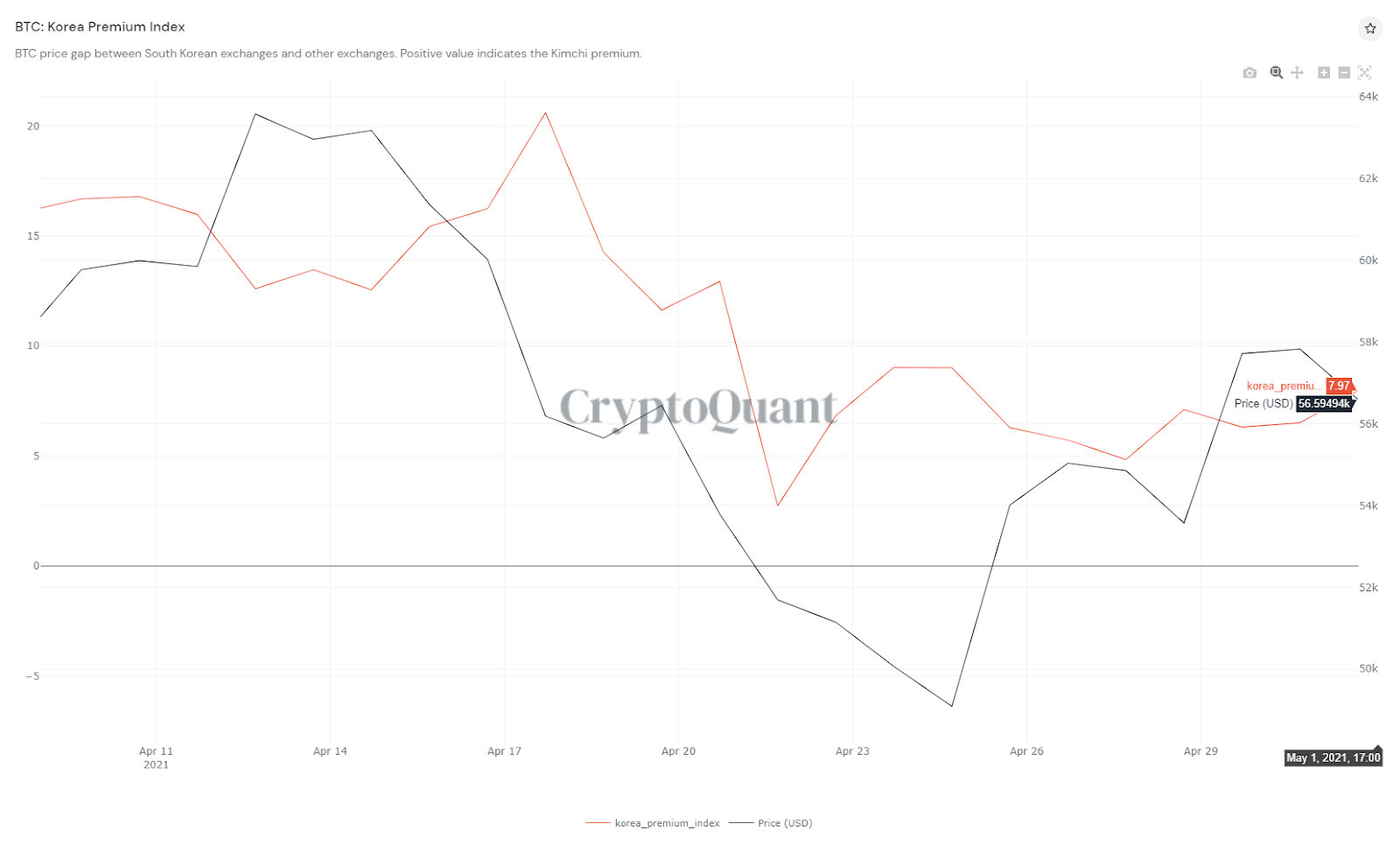 The Korean BTC premium did not recover its highs this week, but still retains a healthy 8% premium as rumours that institutional interest is beginning to heat up in the Korean market. 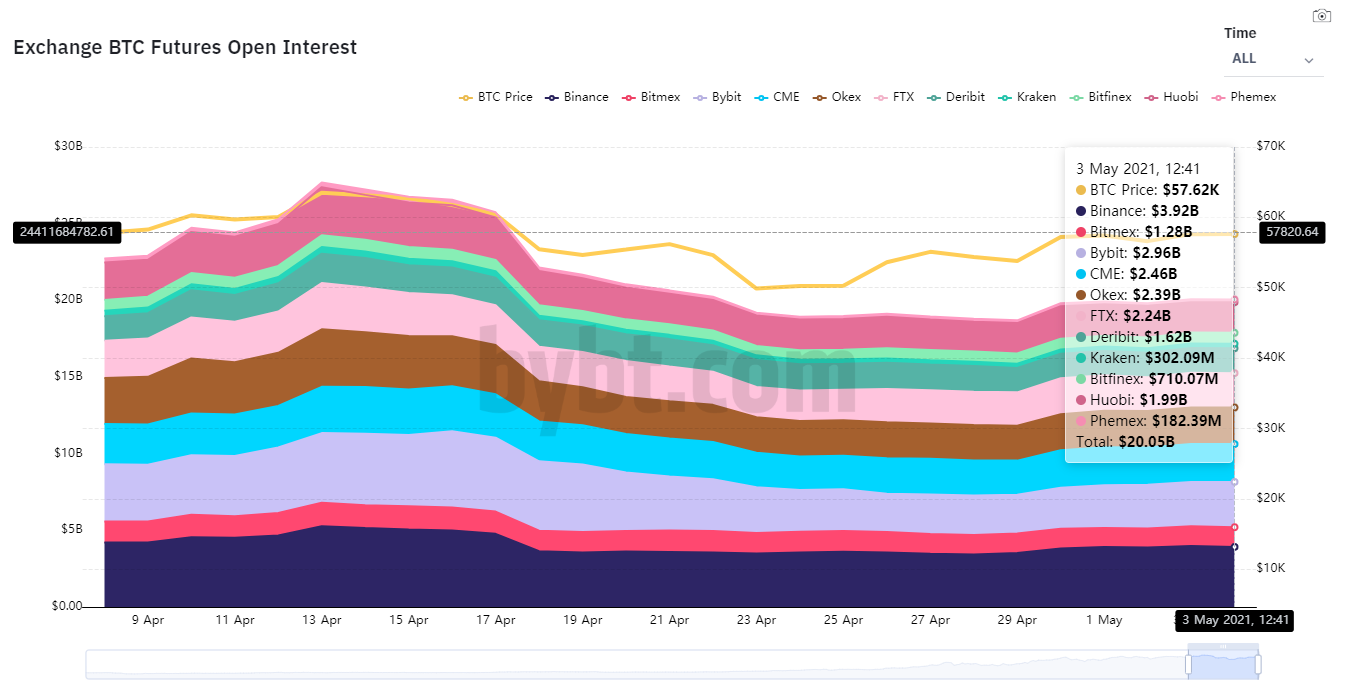 SInce taking a 30% haircut from its peak, aggregated open interest has plateaued between $18B and $20B, not showing any outward signs of aggressive margin traders reopening their liquidated positions.